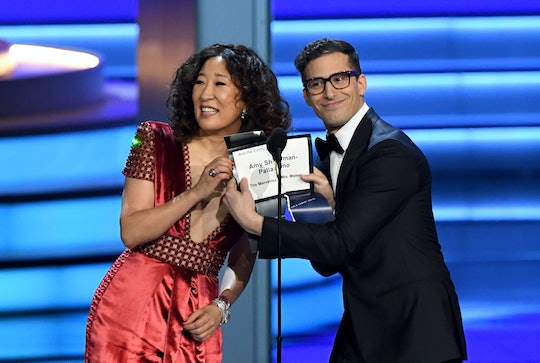 Let everyone else eat sugar cookies, build a snowman and sing Christmas carols... I'm already thinking ahead to one of, in my opinion, the best parts of the next year: the Golden Globes. And with the 2019 version of the awards show airing on Jan. 6 on NBC, people have been wondering who might have gotten the hosting gig. Well, the secret's finally out: Andy Samberg and Sandra Oh are hosting the Golden Globe Awards, and I can hardly wait.

With only 32 days to go before the telecast, things are finally kicking into high gear for the Hollywood Foreign Press Association, which throws the A-list event every year, as The Hollywood Reported confirmed.

Nominations for awards categories will be announced one month prior (on Dec. 6), with stars including Leslie Mann and Christian Slater announcing the nods, Vox reported. Although nothing is known for sure, E! News predicted that some stars and projects are a shoo-in for nominations, including Lady Gaga and Bradley Cooper for A Star Is Born; Emily Blunt and the movie Mary Poppins Returns; the film Crazy Rich Asians and the TV series The Marvelous Mrs. Maisel.

As for Samberg and Oh, it's a great combination between the two actors' comedic and dramatic chops. “We’re excited to welcome Sandra Oh and Andy Samberg as co-hosts of Hollywood’s Party of the Year,” Hollywood Foreign Press president Meher Tatna was quoted as saying by The Hollywood Reporter.

“Both Golden Globe Award recipients have continually showcased their talents in film and television, and we can’t wait see what their undeniable chemistry will bring to the Golden Globes stage.”

Samberg is a veteran of the popular show Brooklyn Nine-Nine and also has experience hosting, dating back to handling the Emmys in 2015, according to USA Today, which added that Oh, though she does not have a ton of hosting experience, is fresh off a hit with the BBC's Killing Eve. Plus, as fans well know, she was Dr. Cristina Yang on Grey's Anatomy.

Despite what The Hollywood Reporter called a ratings decline for awards shows, Vox noted the Golden Globes are considered a "fun" event to watch due to several factors, including the mingling of film and TV personalities, a general party atmosphere, and an air of unpredictability that evenings such as the Oscars seem to lack.

In 2018, for example, as Vox detailed, the Golden Globes caught buzz for being one of the first events in which Hollywood replied after widespread news of the Harvey Weinstein sexual abuse scandal broke. As the site noted, actresses and some male stars wore somber black clothing on the red carpet as a sign of protest against a lack of gender equity in the film industry.

The Golden Globes are also known for another fun thing: A yearly awards "ambassador," the son or daughter of a big star who is making a public debut of sorts. This year's ambassador? Isan Elba, 16-year-old daughter of Idris Elba, confirmed Entertainment Weekly. That'll be a fun one! Past Ambassadors have included Dakota Johnson and Rumer Willis, according to the Golden Globes site.

A lot of people who remember the Globes being super-witty under the co-hosting of Tina Fey and Amy Poehler and are sad to let those memories go may really enjoy Samberg and Oh together; they presented a parody of La La Land at the 2018 Emmys, which I'd forgetten all about untilThe Hollywood Reporter article reminded me. They also seem to have a similar dry wit. There have been many unexpected moments at the Globes over the years, and this show should be no exception.