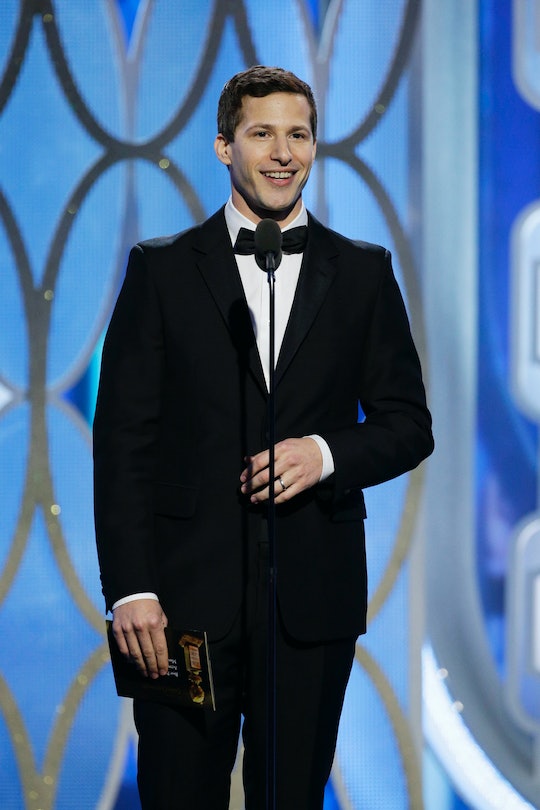 Andy Samberg's Golden Globes Jokes Nailed It, Proving He Should Host Next Year

With a rather rocky start to the Golden Globes for Ricky Gervais — a few jokes went a little far, including his jab at Ben Affleck's infidelity — a few people had their eye on a different comedian to take the stage as the Globes' host next year. Andy Samberg presented at the Golden Globes, and his comedy was on point. Before he announced the winner for Best Actress in a TV Series - Comedy or Musical, he made a few light jokes involving Rob Lowe, Bill Cosby, Cate Blanchett, and Kate Winslet — but none of them actually went into "mean" territory, and that's why he should definitely host next year.

On the red carpet, Samberg had only good things to say about the British comedian hosting the awards on Sunday. He told E! that he believed Gervais would do a good job and pointed out how comfortable Gervais is in the role. "He's done this so many times," he told E!. "He's like up there with a beer. He doesn't care."

When E! pointed out Gervais' drinking, Samberg brushed it aside. "He's British! They have beer for breakfast." That happy-go-lucky, inclusive attitude is the same one that had many viewers vying for Samberg as the next host of the Golden Globes.

Here's Samberg's minute and a half that rocked the Golden Globes on Sunday:

The Lonely Island comedian and Brooklyn Nine-Nine star tried his hand at MCing an awards show last year, when Samberg hosted on the Emmys. The reviews were mixed, but overall, it seems like his comedy was deemed subtle but "incisive" (as Wired called it). He kept things moving, staying out of the way but delivering a few witty remarks. And that's exactly what a host should be: someone who adds a few laughs to the night, not someone who makes the attendees feel like they're now part of The Hunger Games.

During an interview with E! on the Golden Globes' red carpet, Samberg talked about winning his first Golden Globe last year. "It's the least prepared I've ever been on a stage, including, like, elementary school plays," he told Ryan Seacrest. "When they called my name, I was, at the same time, excited and also like, 'Oh no,' 'cause I had nothing. So I got there and that's what I said — I said, 'Oh no!'" His self-deprecating humor and ability to keep things light are impressive.

Samberg offers up a sense of humor that's not only funny, but it's nice. Because, you know, you can be both.