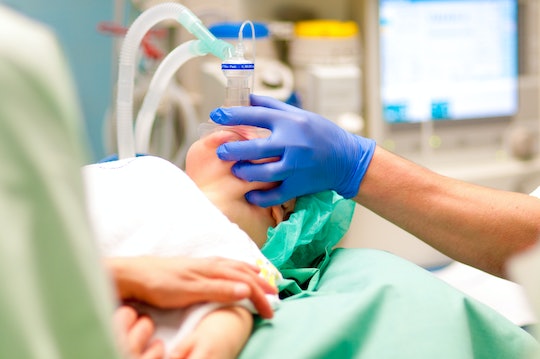 In 2016, the U.S. Food and Drug Administration issued a warning to parents and the medical community about the use of anesthetics and sedatives in children under 3 years old. The FDA asserted in its notice that prolonged or repeated exposure to anesthesia could affect a toddler's brain development. But new research puts that warning in question, as it has shown that anesthesia in young kids doesn't affect their intelligence.

A new study published in Anesthesiology found no evidence that kids who are given anesthesia before they turn 3 years old have lower IQs compared to their peers who haven't been put under anesthesia before that age, according to WLTZ. In particular, Mayo Clinic researchers studied nearly 1,000 people from Olmsted County, Minnesota, who were born between 1994 through 2007, and discovered that intelligence, memory, and other brain function measures were comparable among the kids exposed to anesthesia before age 3, either once or multiple times, and those children who weren't.

These findings are contrary to the FDA's 2016 warning, which was largely based on animal trials that showed a link between anesthesia and brain development delays. (The agency issued a new, updated warning last year.) Romper reached out to the FDA for comment, but did not hear back in time for publication.

For the majority of kids undergoing surgery, the results overall are reassuring. About 80 percent of kids who need surgery under age 3 only need one, and it's relatively brief.

Although informed by animal studies, the FDA's initial warning also noted that human studies found that "a single, relatively short exposure to general anesthetic and sedation drugs in infants or toddlers is unlikely to have negative effects on behavior or learning." Still, the FDA wrote, because more research is needed to understand the effects of early exposure on brain development, the agency was still requiring that warnings be added to labels for anesthetic and sedation drugs.

But some members of the medical community were concerned about the FDA's decision, and its implications on needed medical procedures that cannot be delayed safely. A pair of doctors wrote in a 2017 editorial for The New England Journal of Medicine:

Until reassuring new information from well-designed clinical trials is available, we are concerned that the FDA warning will cause delays for necessary surgical and diagnostic procedures that require anesthesia, resulting in adverse outcomes for patients. We would urge parents, patients, and physicians to carefully consider the risks of delaying indicated procedures.

Still, anesthesia in infants and toddlers is not without its risks, beyond general side effects. Though rare, anesthesia can cause complications in kids, including abnormal heart rhythms, breathing problems, allergic reactions to medications, and possibly death, according to KidsHealth. (Anesthesia-related death is very rare; however, the practice of using dental sedation was recently put under scrutiny after several tragic cases in which young kids died during procedures, TODAY reported.)

The Mayo Clinic study also found that, although there was no discernible impact on intelligence, toddlers who had multiple exposures to anesthesia did show some declines in fine motor skills, including reading comprehension and holding a pencil. To that end, Warner said, according to the news release:

Although we do have some concerns about the children who are receiving multiple anesthetics, it’s important to note that our results don’t allow us to conclude that anesthesia itself is causing problems.

The fact that we found some problems in some of these children means that research in this area needs to continue, including further analysis of our data.