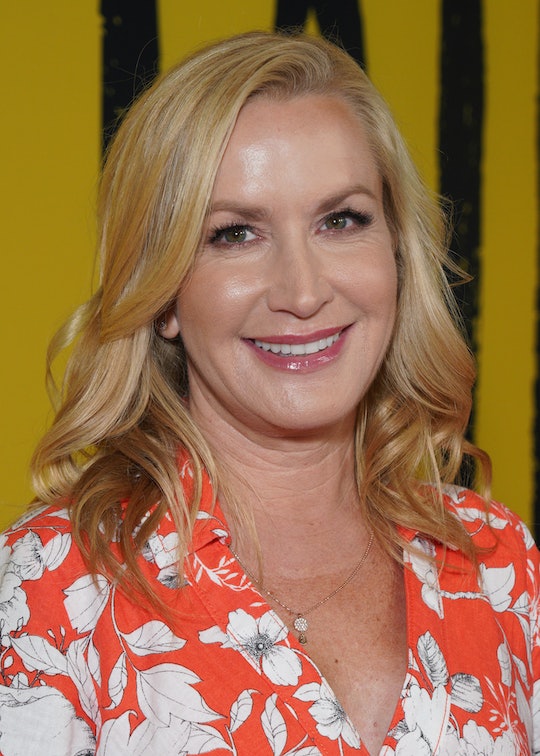 Angela Kinsey Knows All About Being The 'Tall Girl' Out — INTERVIEW

In the triumphant final prom scene of Netflix’s new teen comedy Tall Girl (as is required of all teen movies), the titular tall girl, Jodi, declares she will no longer let being tall define her. “Being tall actually is what makes me me. And I like me. And you should like you. We are all good enough. And once we realize this, no one can take it away.” In an interview with Romper, Angela Kinsey, who plays Jodi’s mom, says this central message feels particularly significant to her, and is part of the reason she was drawn to the script.

“Be yourself” is a hackneyed phrase, and young adults have heard it repeated often enough for it to lose all significance, but there is still unassailable wisdom in valuing yourself without external validation. Adolescents, famously, are not great at this. For most of us it takes years to fully develop a sense of self that can’t be damaged by the opinions of others — and many of us never get there. Self-esteem is the heart of Tall Girl, and a value Kinsey credits in part with her career success.

Tall Girl has already drawn a bit of criticism for positioning a conventionally attractive, thin, white girl as a symbol of body positivity; especially when compared with the character’s black best friend Fareeda (Anjelika Washington) and conspicuous lack of plus-size anyone. But Kinsey says her own experiences as an outcast in middle and high school made the movie’s central message, to fully embrace everything you are, resonate with particular depth. Learning to love your perceived faults is hard for everyone, after all.

Kinsey, best known for playing the pathologically uptight Angela on The Office, says it wasn’t her body that made her stick out as a teen. It was being the new kid.

Not unlike Cady Heron from the seminal teen classic Mean Girls, Kinsey spent the first part of her childhood overseas in Indonesia. When she moved to Dallas, Texas, in the ‘80s at age 14, she had no experience with American pop culture at all. She didn’t know how to perm or tease her hair (“I just kind of let my hair dry,” she says), she’d never had a TV growing up, and there was a whole cultural language she had to learn just to fit in.

Added to that, Kinsey was in advanced classes for several subjects, so instead of mingling with her junior high peers at lunch, Kinsey’s mom would pick her up in the middle of the day and drive her to the high school for the rest of her school day — where she was once again a fish out of water.

She says she doesn’t know if she’d have had the courage to pursue acting without such a strong sense of self.

“And that year where I was the new kid to two schools when I was in ninth grade, my mom would drive me to school, and I would cry on the way to school. And then my mom said she’d drop me off and she’d cry the car ride home,” she says.

Now, Kinsey herself is a mom to 11-year-old daughter Isabel as well as two stepsons, Jack and Cade with husband Joshua Snyder. Kinsey says her parenting style differs from her mom in some ways (she’s a more open communicator, for example) but her mother did instill one value in her and her sisters that she hopes to pass along to her own child — be yourself. “My mom really drove that home with me and my sisters,” Kinsey says. “And my mom is very much who she is.” Kinsey says not trying to be something she wasn’t was important to getting through middle school and has shaped who she is as an adult.

“One of the things that [my mom] said to me over and over was, ‘Angela, don't let other people inform you who you are. Know who you are.’”

Kinsey says she really leaned into this idea, that other people couldn’t tell her who she was, and that the things that made her different — her advanced classes, having grown up on the other side of the world — were her strengths. This self-knowledge got her through high school and college, and she carried it into her career. She says she doesn’t know if she’d have had the courage to pursue acting without such a strong sense of self.

Perhaps you’ll be tempted to wonder aloud why it’s supposed to be radical that a thin, white, and attractive (if tall) girl finds herself at the center of a love triangle.

As for Tall Girl, the title alone is pretty much enough to give you an idea of the plot, and it’s true that a teenager finding her self-confidence is hardly groundbreaking territory. But Kinsey says she identified deeply with the plot and its central character because she remembers feeling like an outcast. Indeed, it’s hard for anyone not to identify with feeling like an outcast from time to time.

In the movie, Ava Michelle stars as Jodi, who, at 6’1”, is physically incapable of blending into the background of her peers. She wants a boyfriend, but only if he’s taller than her. She notes with irony she’s good at the piano only because her hands are as large as a man’s. Heels are absolutely off the table in all circumstances. While her best friend implores Jodi to stand up straight and embrace “all 73 inches of herself,” Jodi just wants to be like everybody else.

It’s a teen rom-com with serious Pretty in Pink vibes, so you can probably guess how everything shakes out in the end. Perhaps you’ll be tempted to wonder aloud why it’s supposed to be radical that a thin, white, and attractive (if tall) girl finds herself at the center of a love triangle.

Ava got her show-biz start on reality TV show Dance Moms, where she was the target of coach Abby Lee Miller’s pointed comments about her size. “Your kid’s arms are horrendous,” Abby said at one point. “She looks like a praying mantis.” Later in the show and with another coach, Ava then used these comments as inspiration for solo routines. In an interview with Teen Vogue, Ava told journalist P. Claire Dodson she’d always been teased for her height, particularly when working in show business. But, ironically, it was Ava’s height — “the thing I hated about myself for so long” — that helped land her the part as Jodi, her first-ever acting role. By the end of the movie, Jodi has learned to wear high heels proudly and to value those around her who have always celebrated her height.

To “be yourself” is easier said than done and it’s particularly tricky in high school — and that goes for everyone. But embracing your authentic self can make all the difference. After all, just look at Kinsey. “One of the things I tell my daughter all the time,” she says, “is that ‘If I can give you any gift, Isabel, it’s to be OK with who you are and not let what other people think and do inform who you are. You are who you are, and you are awesome.’”