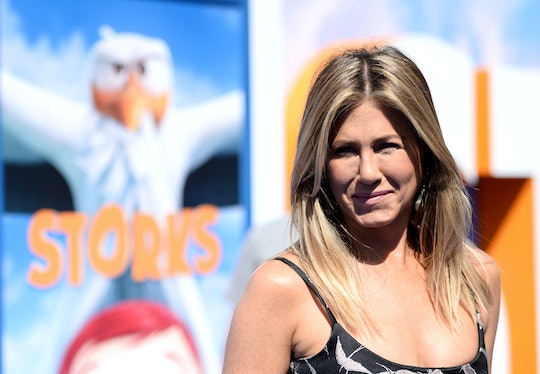 News broke early on Tuesday, September 20, that Angelina Jolie filed for divorce from Brad Pitt. TMZ, who first broke the story, cited that Jolie is filing for full "physical custody of the couple's 6 children," and that sources connected to the couple say the filing has everything to do with "the way Brad was parenting the children," however that has yet to be confirmed by either Jolie or Pitt (and it's worth noting that as of now, the filing did not make specific a claim or accusation against Pitt or his parenting). A source "familiar with the filing" confirmed to CNN that Jolie did in fact file for divorce from Pitt. Romper reached out to both Jolie and Pitt's publicists and attorneys about the filing and has yet to hear back. A statement given to Reuters by Jolie's attorney Robert Offer read: "This decision was made for the health of the family. She will not be commenting, and asks that the family be given its privacy at this time." In a statement provided to PEOPLE, Pitt said:

And while details from the filing continue to roll out, there's one incredibly important thing everyone should keep in mind: Angelina Jolie & Brad Pitt's divorce has absolutely nothing to do with Jennifer Aniston.

In the wake of her high-profile divorce from Pitt (the couple divorced in October 2005), as a society we have long since mourned the loss of Aniston's "perfect" marriage. And no matter what Angelina Jolie and Brad Pitt have done, we've always turned the question immediately toward What Will Jennifer Aniston Do Or Say Or Think Or Feel About This? When Brad and Angelina were spotted together on an island vacation with Jolie's son (whom Pitt later adopted as well), we asked: What does Jennifer Aniston think? When the divorce between the once "perfect" couple was finalized, we worried WWJAD now? When Brad and Angelina announced the birth of their first biological child, we wondered WWJAD? And later, when Brad and Angelina again announced the arrival of their twin children Vivienne and Knox, we were chiefly concerned with how this would feel for Jen. Hell, even when Jennifer Aniston married longtime partner Justin Theroux, we billed the marriage as "OK for now, but if Brad wants her back, all bets are off." And now, in the wake of the filing, the old question once again flares: What will Jennifer Aniston do?

And here's the answer: Nothing.

Aniston and Pitt have been divorced for nearly 11 years. Since then, she has gone on to marry someone else (someone who she likely married because maybe she loves and cares about and wants to spend the rest of her life with that person). Pitt, though news of the divorce has surely rocked us all, clearly did the same. Since his divorce from Aniston, he's become a father six times over. So what's happening today in the world of Angelina Jolie and Brad Pitt has absolutely nothing to do with Jennifer Aniston, and inserting her back into the conversation years after we've all moved past all of that is not just unnecessary and dramatic, it's also woefully petty and downright tacky.

Propelling Jennifer Aniston back into the conversation surrounding the intimacies of a marriage and a relationship she's not at all a part of says more about the way we discuss relationships and marriage and divorce than it does about Aniston herself. She's had 11 years to move on and grow and change and reshape and redefine her life into something that has next-to nothing to do with Brad Pitt or Angelina Jolie. The problem is that, no matter how far she goes, we won't let her move on.

Imagine how, even in your own everyday, normal, boring life, someone kept bringing every major life moment back to that ONE TIME something happened to you. Think about it: No matter where you go, no matter how fast you run, how far you sail, how much distance you put between you and That Thing That Once Happened To You, anytime anything relevant happens in your own life (or in anyones' lives connected to That Thing), the conversation immediately redirects back to that. The thought of redirecting the conversation or explaining (again and again and again) that this is not something that matters to you or even affects your life anymore is exhausting. It's belittling. It's insulting. We won't let Jennifer Aniston escape her divorce from Brad Pitt, which is a really polite way of saying that we don't see anything as anyone more than the person who was once married to Brad Pitt but is now divorced from him.

And if that's not a slap in the face, then I honestly don't know what is.

Claiming that Jennifer Aniston has somehow "won" when it comes to Angelina and Brad's divorce is a pretty disgusting way to look at the fall-out of relationships, past or present. When we give logic to treating divorces as "competition," we ensure that no one "wins," because talking about divorce in terms of points earned and points lost makes it a game. People change. Lives change. Circumstances change. I'm not sure that Brad Pitt thought he was "winning" when he endured the fallout of one marriage and the beginning of another. I'm not sure Jennifer Aniston looked at her marriage to Justin Theorux as "winning." And I highly doubt the reality of breaking up not just a 12-year partnership, but also a family and homes and routine and the lives of six children is something Angelina or Brad are really putting points against. So it kind of makes sense that we shouldn't, either.