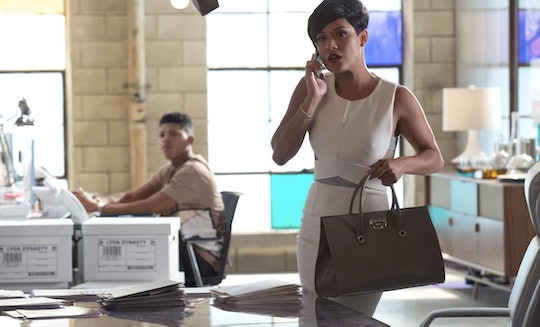 Just when you think Empire can't get anymore insane, they go and throw another unpredictable twist, leaving us in awe all over again. On Wednesday's explosive episode, Anika tells Hakeem she is pregnant on Empire — actually she tells the entire Lyon family — and she has one major request. As you might imagine, the family's reaction was not exactly enthusiastic about the news that Anika was carrying the Lyon Heir. The question now remains, will the Lyons oblige to Anika's request?

Rhonda and Andre are the first to find out that Anika is carrying Hakeem's baby after witnessing her pregnancy-related nausea and morning sickness, eventually leading her to let the rest of the family in on the secret. Clearly, Anika having Hakeem's baby complicates things for everyone in the Lyon clan. This is basically the mother of all scandals, adding to all the drama that has already unfolded. (To refresh, Anika was formerly married to Lucious, but is carrying Lucious' son's baby, her former — and not related — stepson.)

So why is Anika coming forward with this? My first thought was that she is after money and power, obviously. After all, she keeps referring to her unborn child as the "future heir" of Empire. It doesn't seem like she is uber excited to be a mom, either, but hey, people show emotions in crazy ways. Surprisingly, though, her request has nothing to do with money. Instead, Anika claims she just wants her child to have a real family.

Does she really expect them all to be just one big happy family? She and Lucious still have unresolved feelings from their past relationship and Hakeem just proposed to his girlfriend, Laura, so I highly doubt he's ready to take on daddy duties. And as for Cookie? Well, I can guarantee that she is not about to let the woman who tried to take her down insert herself into the Lyon family forever. Guess we'll have to wait it out and see how this sticky situation plays out.