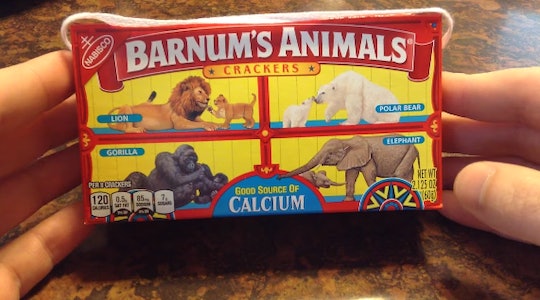 The animals have escaped from the zoo. Animal crackers boxes got a redesign, so the boxes of animal crackers you may give to your kids will now look a little different than the ones you may have enjoyed as a child. Mondelez International — the parent company of Nabisco, which makes these animal-shaped snacks — has redesigned the packaging of its animal crackers, reportedly following pressure from People for the Ethical Treatment of Animals (aka PETA) to do so, according to CBS News.

The animal crackers in question are actually called Barnum’s Animals crackers, and Nabisco has been making the cookies since 1902, The Seattle Times reported. For years, the animals on the box were shown in cages, which apparently drew the ire of PETA. So, after 116 years, the critters on the package are no longer behind bars, and appear to be roaming free instead, USA Today reported.

Romper reached out to Mondelez International for comment on the redesign, but did not immediately receive a response.

PETA wrote a letter to Mondelez in the spring of 2016 seeking a redesign of the packaging of animal crackers, which read in part, according to CBS News:

Given the egregious cruelty inherent in circuses that use animals and the public's swelling opposition to the exploitation of animals used for entertainment, we urge Nabisco to update its packaging in order to show animals who are free to roam in their natural habitats.

And following the announcement that Nabisco and Mondelez have redesigned the iconic boxes, PETA wrote, in part, on its blog on Monday:

The new box for Barnum’s Animals perfectly reflects that our society no longer tolerates caging and chaining exotic animals for circus shows. PETA is celebrating this redesign just as we’ve celebrated the closure of Ringling Bros. and Barnum & Bailey Circus and an end to the use of wild animals in many other circuses.

Since PETA wrote its letter, the snacks' namesake circus, Ringling Brothers and Barnum and Bailey, closed down, CBS News noted. The 146-year-old circus reportedly shut down in May 2017 because of slow ticket sales. So there's no more Ringling Brothers and Barnum and Bailey circus, and no more Barnum's animals crackers boxes that look like the animals are in circus cages. Both are definitely big changes.

The new animal crackers boxes are now on store shelves in the United States, according to Philly Voice. The new boxes show a zebra, elephant, lion, giraffe, and gorilla walking side-by-side in grass instead of appearing to be on display in cages, The Seattle Times reported. But the boxes still have the iconic red and yellow coloring they have for years.

Nabisco and Mondelez have actually redesigned these boxes before, but only for limited special edition packages, CBS News reported. In 1995, for example, an endangered species collection raised money for the World Wildlife Fund, and in 1997, there was an animal crackers "zoo collection" to raise money for the American Zoo and Aquarium Association.

Plus, in 2010, Nabisco worked with designer Lilly Pulitzer on a special pastel-colored box to raise money for tiger conservation, ABC News reported. You can see that special edition box in the image above.

Mondelez spokeswoman Kimberly Fontes told USA Today that animal crackers are "probably one of, if not the oldest, (product) in our portfolio. We're always looking to see how to keep it modern, to keep it contemporary with customers."

The outlet noted that while the design has changed to reflect that the animals are "free" and not in circus cages, the name that refers to P.T. Barnum's circus, which was once called the "greatest show on Earth," will remain unchanged.

So the recent Hugh Jackman movie, The Greatest Showman, isn't the only reference your kids will get to Barnum and his circus in the future, even if the iconic animal crackers boxes that bear his name will look a little different for them from now on.