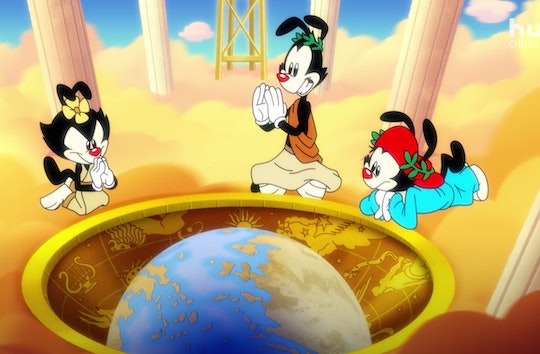 The Animaniacs are back, baby! After a roughly 20-year hiatus from TV, a newly rebooted Animaniacs series is coming to Hulu that will not only give you some serious nostalgia, but will provide you and your family with a whole lot of laughter.

Yakko, Wakko, and Dot are back for the first time since going off the air in 1998. The hilarious animated siblings that always seem to get themselves into some pretty peculiar situations will make their big debut on Hulu this November. You never know what you'll get from the three of them, but if this new reboot is anything like the original series, then you know there is plenty of on-the-nose commentary and laughs to come.

The Animaniacs Trailer Debuted On Oct. 21

The first official trailer for the show dropped on Oct. 21, giving fans a taste of what's in store with the brand new episodes, and it's safe to say that Yakko, Wakko, and Dot are in on the joke. "Reboots are symptomatic of a fundamental lack of originality in Hollywood," Yakko says in the trailer before gladly accepting a check from Hulu.

Throughout the 13-episode season, Yakko, Wakko, and Dot experience new things they missed during their 22-year absence, like quinoa wraps, tablets, and even modern politics. Of course, there is still that super catchy theme song and over-the-top violence kept from the original iterations, plus a surprise appearance from Pinky and the Brain, who will also be featured in the new series.

All 13 brand new episodes will start streaming on Hulu on Friday, Nov. 20, a full 22 years from the airdate of the final Animaniacs episode, according to Variety. You will need a Hulu subscription, which starts at $5.99 a month, to watch.

While you're there, you can also check out all five seasons of the 1993 Animaniacs TV show and the 1999 movie, Animaniacs: Wakko's Wish, both of which you can stream right now.

You Can Expect Some Serious Hijinks

According to Hulu, the three siblings will continue to wreck havoc on the lives of everyone they meet in this reboot: "After returning to their beloved home, the Warner Bros. water tower, the siblings waste no time in causing chaos and comic confusion as they run loose through the studio, turning the world into their personal playground."

The rating for the new episodes is not quite clear, but Hulu does classify Animaniacs under the "Kids" category. Common Sense Media has classified the show as suitable for kids ages 6 and up, due to the slapstick violence used in the show.

Not Much Has Changed In The Past 22 Years

The voice behind Yakko, actor Rob Paulsen, told The A.V. club that longtime fans of the show won't be disappointed. "I do know the ethos of the show hasn't changed," Paulsen told the outlet. "It's not being written to condescend. It's being written to appeal to all ages, just like Looney Tunes."

You can compare these brand new episodes with the old ones when 2020's version of Animaniacs premieres on Hulu in November.