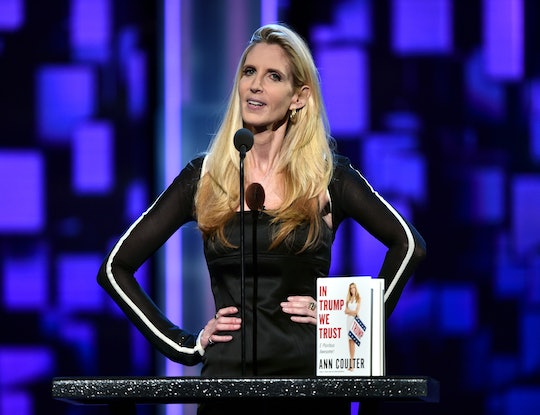 This year's Comedy Central Roast is being held in honor of Rob Lowe for the crime of being an "ageless heartthrob," according to the network. There's plenty of fodder for the dais of roasters to go after with Lowe: he got busted making a sex tape with a 16-year-old girl in 1988 and his television shows have a terrible habit of getting canceled after one season. But the comedians taking part actually went much harder after one of their own than after the guest of honor. Ann Coulter jokes from the roast of Rob Lowe that went too far gave the whole night an unsettling vibe.

Coulter was one of three women taking part in the roast, alongside Nikki Glaser and musician Jewel, and she was there promoting her new book In Trump We Trust. So there was a fair amount of material to work with when making fun of her, and its common for the roasters to tease each other a bit in addition to teasing the guest of honor. At one point, Coulter bombed telling a joke and the cutaway to SNL cast member Pete Davidson's facial expression got a bigger laugh than she did. Stuff like that is fair game.

And look: Ann Coulter is a conservative political commentator who self-admittedly likes to "stir up the pot" (read: troll). Her political views, public actions, and even to some extent the parts of her personal life that have become part of the public eye are reasonable targets for critique.

Ann took it in stride in the moment, quipping at one point, "I want to welcome everybody to the Ann Coulter roast with Rob Lowe." And even after the roast taped, she told The Hollywood Reporter: "People are too thin-skinned. My only rule about a joke is that it should be funny. Nothing offends me. 'Bored me' is a different story."

But many of the jokes at her expense were lazy, they took aim at her looks and her womanhood, and even the ones that "punched up" at her, so to speak, were somehow still made at the expense of people like Muslims, Mexican laborers, and Trayvon Martin. Jimmy Carr even turned into a Twitter egg incarnate and suggested that she kill herself. It was gross. Structures of power between men and women (really, between men and everyone else) are not yet balanced enough for men to be able to make jokes about a woman's appearance or her gender without sounding like misogynistic garbage. For example...

Peyton Manning took a dig at Ann's looks implying she was horse-faced, saying: “I’m not the only athlete up here. As you know, earlier this year, Ann Coulter won the Kentucky Derby.”

Pete Davidson joked, "If you are here, Ann, who is scaring the crows away from our crops?"

Jeff Ross set up what may have been fair shots at her politics — both her anti-gay marriage stance and her support of Trump — but relied on mocking her gender to do it, saying:

"Ann is against gay marriage. What is your thinking on that? 'If I can’t get a husband, they can’t either?

Ann Coulter wants to help Trump make America great again. You can start by wearing a burka. You have a face that would make doves cry."

That wasn't the only quip at the expense of marginalized folks either.

Nikki Glaser joked, "The only person you will ever make happy is the Mexican who digs your grave."

Rob Lowe said, "After seeing your set tonight, we’ve seen the first bombing you can’t blame on a Muslim."

David Spade threw in, "It looks like she’s having a good time. I haven’t seen her laugh this hard since Trayvon Martin got shot."

But Jimmy Carr's dig was especially deep. He said, "Ann is one of the most repugnant, hateful, hatchet-face bitches alive. It’s not too late to change, Ann. You could kill yourself."

Jewel actually captured the problematic crusade against Ann Coulter really well at the Roast, saying, "I do want to say as a feminist that I can’t support everything that’s been said tonight. But as someone who hates Ann Coulter, I’m delighted."

It's obvious that teasing is going to happen at a roast. The whole reason people get roasted in the first place is because they're powerful enough to warrant being made fun of. But there's a subtle line between making them the butt of jokes because of the privilege that they carry and using your own privilege to dump all over marginalized identities. Coulter could have been the target of some nuanced social and political critiques. Instead, a bunch of dudes just relied on how ugly they think she is to tear her down.