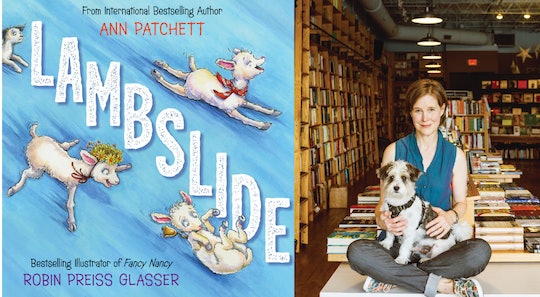 Ann Patchett is a literary juggernaut, and yet somehow, unlike other juggernauts, still just a single person churning out the works of art. Her books are always prominently displayed in bookstore: Bel Canto won the PEN/Faulkner award and was adapted into a movie, while Commonwealth was a bestseller right out of the blocks. In addition to writing literary fiction and memoirs, and running an independent bookstore, Patchett is now writing picture books, the first of which, Lambslide, debuts on May 7, 2019, so now, even the youngest readers can enjoy Patchett's wisdom and love of words.

Ann Patchett spoke to Romper via phone to discuss Lambslide and what it's like to write for the youngest of readers. Writing a picture book was not something Patchett had considered, until she was urged to try by illustrator Robin Preiss Glasser.

Glasser's work is probably instantly recognizable to most parents: she's the artist behind the Fancy Nancy series, written by Jane O'Connor.

When Glasser asked Patchett if she had ever considered writing picture books, Patchett answered that, no, she never had. As Patchett recalls to Romper: "I said, 'No, no. I don't do that. I don't write children's books.' And [Glasser said], 'Well, let me sit down and explain it to you.'"

So when Patchett went home that evening, she took that advice and ran with it. In fact, the confines of picture books fueled her imagination. In her work as a journalist, word count has always provided her with the scope and shape of a story. "If I write an op-ed for the New York Times, and they say, 'We need 820 words.' I hand it in at 820 words, and I conceived the whole shape in that way," Patchett tells Romper. "I hate it when an editor says, about a magazine piece, 'Write it at 2,000, or whatever. And we'll just cut it down to 1,200.' No, no, no. I'm going to pick the words. You conceive of a shape based on word count, if you come from that tradition. And, that, to me, is where my ability to write children's books comes from."

Patchett didn't just write one story, either. Inspiration really struck. She says, "It really was amazing. It's almost like if somebody handed you a tuba, and said, 'Just try.' And then, you thought, 'God, I can play the tuba. Who knew?'"

Lambslide is an adorable story. The three lambs that star in the story are brimming with personality. They are naive and a little bit entitled, but not at all in an unlikeable way. To quote the first page of the book, the lambs "believed the sun came up in the morning because they were ready to get up and play and set at night because they were sleepy and ready for bed." Glasser's illustrations ooze with character. Each of the three lambs has a distinct personality, and the same is true for the Farmer family, the adorable dog that graces each page, and all the other barnyard animals.

The term "lambslide" is an adorable pun. The lambs mishear when their little girl Nicolette talking about a school election. Pretty soon, they're imagining all the fun they'll have when the slide is built for them. One could argue that Lambslide is about civics. More than just the school election, the lambs set out to poll the other farm animals on their opinions about the slide. They build a consensus. They consider constraints on size and material. They even hold their own vote.

The inspiration for the story, Patchett says, is based on a real-life election. "When Conor Lamb won the 18th congressional district in Pennsylvania, nobody thought [a democrat] would win. The next day, in the New York Times, there was a photo of a rally and somebody was holding a sign that said 'lambslide' on it. And I said to my husband, 'Excuse me, I've got to just run upstairs right now.'"

And that's how the story about lambs and an election was born.

But more than teaching kids about civics, the story is endlessly readable and fun (as one would expect from a master storyteller) and the illustrations are brimming with detail. While during the first read, you might simply focus on what the lamb is doing, in subsequent reads, children might discover that the Farmer family is doing important farm work throughout the day. Since children love reading and re-reading and re-reading the same books over and over, parents will appreciate these careful details.

Another little Easter egg to hunt for is the dog. When asked about which details of the book are personal, Patchett immediately said that the dog in the book is really her dog Sparky. In fact, Glasser was so serious about getting Sparky right in each illustrations, that she'd ask Patchett to pose him and send photos. Glasser and Patchett collaborated during every part of the process, and Patchett describes their relationship as "a partnership."

Patchett and Glasser aren't stopping after just one book, either. Patchett has written many more stories about the Farmer family. She's even written a book all about Sparky. She's also written picture books outside of the Lambslide universe. Want a sense of how committed Patchett is to publishing more picture books? "If I died tomorrow, my picture books would still be coming out for years."

When asked if she was writing for any children in particular, Patchett said that she was thinking of the child of one of her bookstore colleagues. "There's a way in which, when I think of a child, I think of Archer because he is the bookstore child. He's the child that we all think of. He's our iconic, go-to child."

While Patchett kept Archer and other children in mind while writing picture books, she also writes for her own amusement. "So much of it is my own desire just to laugh these days — these days that don't seem very funny," she says. "So, writing something in which I can crack myself up for a minute, makes me very happy."

Patchett even credits learning the picture-book craft as influencing her novel writing. "I've been writing a novel while I was writing the children's books. And that [writing] has influenced the novel, because I just kept looking at sentences thinking, 'What words can come out? What words can come out? How do I make this tighter? How do I make it clearer?' Which, is always my goal. But children's books just — boy — they make you sharp on that front."

You can order Lambslide from your favorite bookseller. You can even order it from Patchett's bookstore, Parnassus Books.