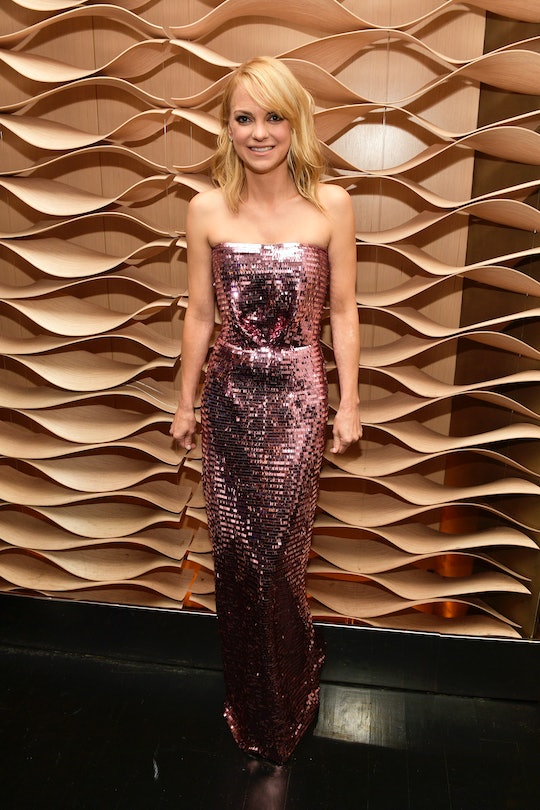 In case you missed the news, Chris Pratt and Katherine Schwarzenegger got engaged on Sunday following a brief stint of dating. Anna Faris quickly commented on their Instagram photo announcing the occasion, writing that she was "so happy" about the development. But just how cool is Faris with the engagement? As it turns out, Anna Faris reminded Pratt that she's an ordained minister during a text convo about the impending nuptials.

I imagine there's a lot pressure to act calm and collected about your ex moving on when you're in the public eye. Faris was put in this exact position after Pratt popped the question to Schwarzenegger, a moment he captured for the 'gram. "Sweet Katherine, so happy you said yes!" he wrote. "I’m thrilled to be marrying you. Proud to live boldly in faith with you. Here we go!"

Of course, Faris couldn't simply ignore this post. If she did, a ton of articles speculating about her feelings would likely follow. So, Faris did what any mature and savvy celebrity would do — she commented on the post with her well-wishes.

"I'm so happy for you both!!" she said in the comments section, according to TMZ. "Congratulations!"

What's also important to note is that Faris knew about the engagement before the Instagram post went up. Pratt — to his credit — was respectful enough to text Faris personally about the engagement news. During the latest episode of her podcast, Anna Faris Is Unqualified, Faris opened up about the text and her initial reaction.

"Chris texted me this morning and he was like, 'I proposed to Katherine last night,'" she revealed, according to Elle. "And I was like, 'Ahh, that's amazing.'"

As for how Faris responded? "I texted him back like, 'I just wanted to remind you I'm an ordained minister.'" Although I highly doubt — emphasis on highly — that Pratt will take Faris up on her offer, it's a pretty funny she said it in the first place. And there's nothing like humor to diffuse a potentially awkward situation, right?

All jokes aside, Faris is truly happy for the couple. "I knew that it was going to happen," she said, according to Glamour. "I love her, and I love him, and I'm just so happy that they found each other."

Making the situation especially easy for Faris is that she's in a successful relationship of her own. Faris has been dating cinematographer Michael Barrett since September 2017, and they just enjoyed a romantic trip to Paris in December 2018.

It also doesn't hurt that Pratt and Faris are committed to ensuring their 6-year-old son, Jack, is happy amid all of the changes.

"Chris and I work really hard 'cause we have Jack, that is sort of the long game idea and making sure Jack is really happy, which makes us really happy," she said, according to Us Weekly. "We have sort of the luxury of circumstance. You know, we are both in other loving relationships."

Even if Faris doesn't end up marrying Pratt and Schwarzenegger, I'm sure she'll be at their wedding cheering them on — with Jack by her side.