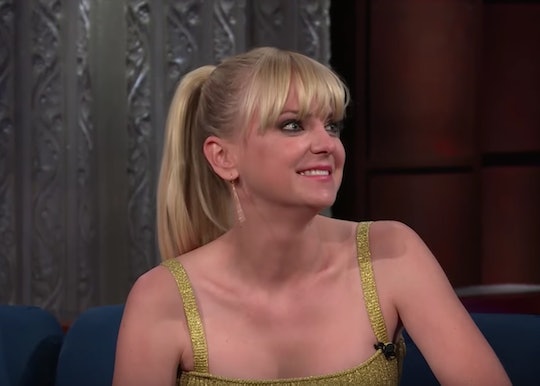 Back to school season is a critical time for most moms, including celebrity moms. Actress and mom to her 7-year-old son, Jack, Anna Faris, knows a thing or two about this. It's super nice to know that Anna Faris sends her son Jack to school with the sweetest thing stuffed in his backpack — because other moms can borrow this brilliant idea, too.

It's hard to believe that Faris' son with her ex-husband, Chris Pratt, is actually headed back to school this year, especially since it feels like she just gave birth to him. But in spite of being born to some seriously funny people, Jack — who is at a "mischievous age" — according to Pop Sugar is just like any kid his age — going to school can be hard for him. But luckily, Faris has a solution for this. Although Jack is a fan of buying lunch at school (what kid doesn't love eating a hot slice of pizza every week?), Faris finds a way to sneak him thoughtful notes in his backpack that he can read while at school, according to PopSugar. It's her way of letting him know that she's with him, even if she isn't actually with him.

That is so sweet. Even if she's not elbows deep in making peanut butter and jelly sandwiches week after week, she still finds a way to make lunch time and his school day super special for him.

And this is such a sweet thing that other moms can do for their kids, too. Although some kids might find special notes written from their parents in their lunchbox, those who choose to purchase their lunch at school don't have to be left out. Parents can easily sneak in a note in their child's pencil pouch, homework folder, or somewhere in their backpack where they're bound to see it. This way, kids know that their parents are thinking of them throughout the day. It's the perfect little pick me up, especially on the days that school can seem hard or frustrating.

The best thing is, these notes don't require too much thought or effort — the internet is full with inspirational messages and jokes to leave for your kids. Although these jokes might not make parents as hilarious as Faris is, kids will definitely appreciate the effort.

But this isn't to say that Jack's schooling has been smooth sailing with Faris. In 2018, during an appearance on The Ellen Show, Faris revealed that she bombed an interview for a potential private school for Jack, according to People. Oops.

But it definitely sounds like she has made up for that with her super simple and adorable school day notes.

Aside from enjoying little notes, Jack really loves bath time, too. In an interview with Parade, Faris revealed that she has made bath time fun for him. "I start to play musical numbers that I sing and dance to, from like Annie, or The Little Mermaid," she said.

"I know that he's embarrassed, but I know he also really gets a kick out of it, because when I start doing it, he's like, 'OK, fine mom, I'll take a bath.' But a year ago, he was like, 'I don't want to take a bath!' So once I started entertaining him — he's not paying me my union rate, but he'll make up for that later — he's liked it."

Leave it to Faris to make everything fun for her kid — from school to bath time. But you don't have to be a hilarious actress to take this advice, these simple but fun tips are ones that parents can employ for themselves.