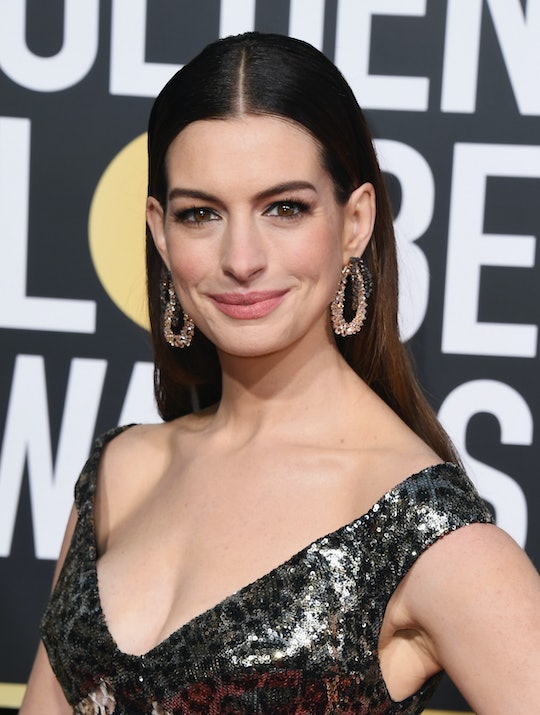 After a long day of chasing my daughter around, not much sounds better than a nice, stiff drink. But the next morning comes early, and "Baby Shark" is bad enough without a pounding headache. And even celeb parents know the struggle. In fact, while appearing on The Ellen DeGeneres Show, Anne Hathaway explained why she won't drink alcohol for the next 18 years, and she makes a pretty compelling argument for abstaining.

Hathaway sat down with DeGeneres on Tuesday to talk about her new film Serenity, the noir thriller that she stars in alongside Matthew McConaughey, and the topic of alcohol came up, as Cosmopolitan reported.

After sharing amusing anecdotes about some of her heftiest hangovers, Hathaway got serious. As she explained in the interview, she decided that the partying wasn't worth the toll it was taking on her family. "I quit drinking back in October, for 18 years," Hathaway told DeGeneres. "I'm going to stop drinking while my son is in my house just because I don’t totally love the way I do it and he's getting to an age where he really does need me all the time in the mornings."

Morning, noon, and night — moms are always on call. Hathaway went on to share one instance in particular that made her want to stop drinking, when she was dropping her son off at school, according to HuffPost. "I did one school run one day where I dropped him off at school, I wasn’t driving, but I was hungover and that was enough for me," she said. "I didn't love that one."

That was the point when Hathaway decided to stay away from alcohol until her son moves out. She and husband Adam Schulman welcomed their son Jonathan Rosebanks Schulman back in 2016, according to E! News, and kept their family life out of the spotlight. Such was their propensity for privacy, Jonathan was almost 1 before Hathaway shared the first photo of him with the public, according to Vanity Fair. But the proud mama was uncharacteristically candid when talking about how drinking has impacted her parenting — and vice versa.

Mixing alcohol and children can be tricky, so the tendency towards sobriety is understanding. For a recent survey on motherhood and drinking, researchers from Parents spoke with 1,400 moms about their drinking habits after having children. Roughly half of the participants reported their alcohol consumption as being less than it was before they were mothers and 39 percent said that they "rarely or never" consume alcohol.

And Hathaway isn't the only celeb with little ones who has decided that it's easier to look after their family with a clear head. Chrissy Teigen has also been open about her decision to put down the drink. During a 2017 interview with Cosmopolitan, Teigen explained that she felt she was "drinking too much" at one point:

I got used to being in hair and makeup and having a glass of wine. Then that glass of wine would carry over into me having one before the awards show. And then a bunch at the awards show. And then I felt bad for making kind of a [fool] of myself to people that I really respected. And that feeling, there's just nothing like that. You feel horrible. It's not a good look for me, for John, for anybody.

Another famously sober parent is Dax Shepard, who has been on the wagon for over 13 years. On his 12 year sober anniversary, according to Good Housekeeping, Shepard tweeted about how he traded "toxic, life-threatening" substance abuse for his family. I think everyone can agree he traded up!

While I'm certainly not here to judge any mom who enjoys a drink now and then, there is something very inspiring about Hathaway's ability to take a candid look at her life choices and make changes for the better of her family. She, Teigen, Shepard, and every other parent out there making sacrifices and tough decisions for their families are superheroes in my book.