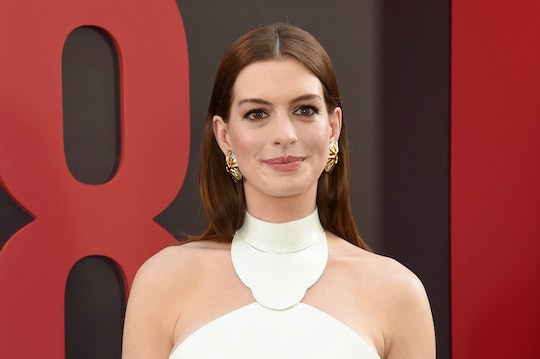 When you become a parent, your priorities change very quickly, especially when there is suddenly a brand new person to care for in your life. Some new moms find themselves switching their priorities immediately, and when actress Anne Hathaway became a mom in 2016, she saw this happening in her life, too. But, Anne Hathaway says that parenting made her take more time for herself, instead of less time — and her reasoning makes so much sense.

Most moms know the first few months (and years, let's be real) of motherhood mean taking less "me" time to focus on the baby. This means less showers, more meals out, and less time spent on self care. But in a new interview with Shape, Hathaway told the magazine that she found the opposite to be true — she started caring for herself more once she gave birth to her son, Jonathan, in March 2016 according to People.

In the interview, Hathaway told the magazine that before she had a kid, she was always trying to keep herself busy. "Before I had my son, I sensed this pressure to fill my schedule," she said. "If I wasn't working, I felt like I was wasting time."

Many moms find this to be the opposite — a 2018 survey conducted by Munchery found that moms get around 32 minutes of "me" time a day. But, it's likely that those moms did not have as busy of a schedule as Hathaway did. In 2014, just two years before she gave birth, Hathaway starred in five different films throughout the year. This probably meant that she was spending more time on the road and less time at home with Shulman, who she married in 2012, according to People.

So, when she had her son, it makes sense that she had to slow down just a bit more and stay in one place to take care of him. And it sounds like she is loving this aspect of her life now — she shouldn't feel guilty for enjoying this time to herself with her son, especially since it seems as if this time has inspired so many positive changes.

This wasn't the only change that Hathaway has made for her son. In addition to slowing her life down and making more time for herself, she has also given up drinking for Jonathan.

In an interview with Modern Luxury, Hathaway explained that her "five day hangovers" have caused her to give up drinking until her son turns 18, according to People. "When I'm at a stage in my life where there is enough space for me to have a hangover, I'll start drinking again. But that won't be until my kid is out of the house."

Although these changes might not work for some moms, they clearly worked for Hathaway. And her perspective on these changes is so interesting.