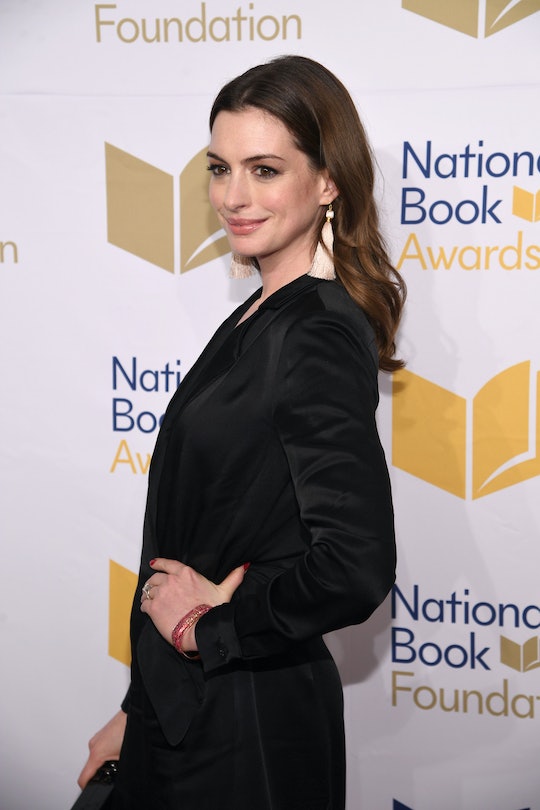 Hollywood celebrities generally seem like they're living the types of lives most of us can only dream about — and for the most part, that's probably true. But there are also plenty of downsides for women in the industry, one of which has to be the fact that every star of child-bearing age seems to be on a perpetual "bump watch." Body shaming is, of course, not even sort of a celebrity phenomenon, but in an Instagram post in April, actress Anne Hathaway wrote about her weight gain to preempt pregnancy rumors and rude comments from online strangers, and in a twisted way, it makes a lot of sense. When asked about the post in a Glamour cover story interview, Hathaway opened up about her decision, and her words are a reminder that big-name stars aren't at all immune to the criticism that is often thrown their way on social media.

Unless you were living under a rock five years ago, you're probably well aware that Hathaway endured a lot of backlash stemming from her 2013 appearance at the Oscars, when she won Best Supporting Actress for her work in Les Misérables. It definitely wouldn't be the first time that a female celeb has gone from generally beloved to generally loathed (Taylor Swift went through a similar experience more recently), and in some ways, it seems like all women who do really well for long enough will eventually become a target for haters and trolls. But Hathaway explained to Glamour that that criticism was one reason for her Instagram weight gain admission, and honestly, it's so uncalled for.

In her April 5 post, Hathaway shared a video of herself working out at the gym, according to Us Weekly, and even though she honestly doesn't really seem to look any different from usual, it's clear that her apparent weight gain was on her mind. In the caption, she wrote,

I am gaining weight for a movie role and it is going well. To all the people who are going to fat shame me in the upcoming months, it’s not me, it’s you.

The very fact that Hathaway felt the need to share that comment in the first place is definitely already problematic. For one, she still looks thin, and it's disturbing to think that anyone would look at that video and not only think that she wasn't, but that they also had the right to tell her about it. More than that though, it's also infuriating that Hathaway had to explain the way her body looked, and that somehow, the fact that she was gaining weight for a movie role was somehow supposed to make it more acceptable (heaven forbid she gain weight for any other reason!).

In her Glamour interview though, Hathaway — who has a 2-year-old son, Jonathan, with husband Adam Shulman — revealed that it wasn't just general fat shaming she was worried about, but the seemingly-inevitable slew of questions that would follow about the state of her uterus. Hathaway hasn't said whether or not she and Shulman intend to expand their family, but she did tell the magazine that she "didn’t feel like dealing with the pregnancy rumors," that would come as a result of her weight gain. And while it's pretty clear that no woman should ever feel like they have to defend their own body, or their right to not have random internet strangers speculating about whether they are pregnant, Hathaway admitted that her "history of being shamed and humiliated, for a lot of different reasons" was definitely something that weighed heavily on her mind.

It wasn't the first time Hathaway felt the need to try to get out in front of a potential body shaming story: in 2016, the actress shared a photo of herself on Instagram posing in a bikini on the beach while pregnant with her son. It wasn't exactly the type of photo most people expected her to share, but in the caption, she explained that there was one specific (and very frustrating) reason behind the choice. Hathaway wrote,

So, posting a bikini pic is a little out of character for me, but just now while I was at the beach I noticed I was being photographed. I figure if this kind of photo is going to be out in the world it should at least be an image that makes me happy (and be one that was taken with my consent. And with a filter).

As any woman who's ever been pregnant can attest, the physical changes that go along with gestating a human aren't always the easiest to adjust to — even if you don't have paparazzi clamoring to get a shot of you on the beach. But when being pregnant while in the public eye means that your best option is to share a photo of yourself even when you wouldn't have wanted to otherwise? Well it's not even sort of surprising that Hathaway felt the need to stop a weight gain-related bump watch before it even had a chance to start.

Even though most women hopefully don't feel like they have to publicly explain their reasons behind gaining a few pounds (it is literally no one else's business, and also there is nothing even sort of wrong with being a human being who has gained weight), Hathaway's post is still one that a lot of people will likely find relatable. Famous or not, body shaming is a reality that women (and many men) have to live with in their daily lives, whether it involves being criticized on social media, or just feeling bad about themselves when they're trying on jeans. And although Hathaway has nothing at all to apologize for, the fact that she felt the need to do it shows just how unhealthy our beauty standards really are.