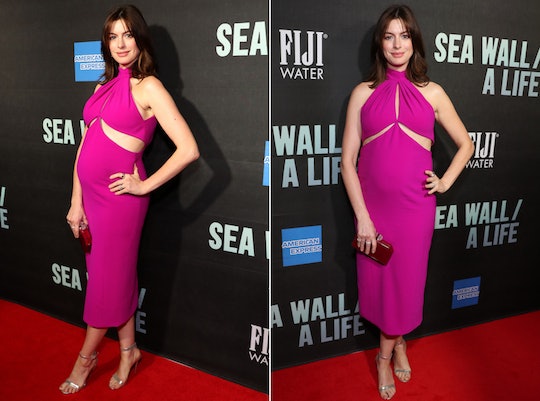 Weeks after announcing that she's expecting her second child, The Hustle star Anne Hathaway showed off her growing bump in a gorgeous designer dress. But Anne Hathaway's latest maternity look also included a sweet, but subtle nod to what will be her second bundle of joy with husband Adam Shulman.

Hathaway wowed onlookers at the New York City premiere of the new Broadway play, Sea Wall/A Life when she walked the red carpet last week in a bright fuchsia, halter-neck gown with keyhole cut outs designed especially for her by American fashion designer Brandon Maxwell, according to E! News. While the dress was stunning all on its own, Hathaway revealed on Instagram that the dress had included a sweet acknowledgement of the fact that she was dressing for two.

"As if it wasn't enough you custom-made me and the bump a knockout dress, you put this tag in it," Hathaway wrote in a caption directed at Maxwell. A photograph Hathaway snapped of the inside of the dress showed a second label embroidered to read, "Anne +1" had been sewn in to the dress just under the "Brandon Maxwell" label. "Thank you, new friend," Hathaway continued.

The 36-year-old award-winning actress revealed she was expecting her second child in late July in an announcement that also briefly acknowledged the fertility struggles she had prior to conception.

"It's not for a movie...#2," Hathaway wrote in the caption of a photograph featuring her baby bump that she shared on Instagram in late July. "All kidding aside, for everyone going through infertility and conception hell, please know it was not a straight line to either of my pregnancies."

Hathaway later told the Associated Press that she'd decided to come forward about her own issues with infertility as she knew first-hand how isolating dealing with those issues can make one feel. "I think that we have a very one-size-fits-all approach to getting pregnant," Hathaway told the news outlet in July. "And you get pregnant and for the majority of cases, this is a really happy time. But [for] a lot of people who are trying to get pregnant: That's not really the story. Or that's one part of the story and the steps that lead up to that part of the story are really painful and very isolating and full of self-doubt. And I went through that."

Hathaway gave birth to her first child, son Jonathan Rosebanks Shulman, in 2016, according to Vanity Fair.

While Hathaway appears to have been incredibly moved by the thoughtful touch Maxwell put in to her custom creation, the designer has also celebrated the mom-to-be. "Gorgeous mama to be and positively one of the nicest people on planet earth, @annehathaway wears custom #brandonmaxwell to tonight’s broadway debut of @seawallalife," the designer wrote on Instagram last week in a post featuring an image of Hathaway on the red carpet. "One of the greatest joys of our job is getting to work with expectant mothers during this special period in their lives, especially because we have a few new moms at our office!"

Although it's not clear when Hathaway is due with her second bundle of joy, fans are surely looking forward to see what else the actress rocks for maternity clothes over the next few months.

More Like This
Chrissy Teigen Credits Popular Animated Kids' Show For Giving Her "Peace & Rest"
What Is Acid Reflux Tape? Chrissy Teigen Swears By It
Joss Stone Reveals Her Uterus Split While Giving Birth To Her Baby Boy
20 Heartwarming Episodes To Help Prepare Your Child For A New Sibling