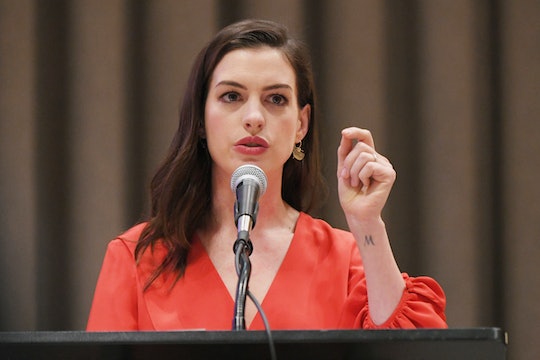 With all the joking about "first world problems," it can be easy to forget the United States' biggest one: it's the only first world country without paid parental leave. But one actress and U.N. Women Goodwill Ambassador hopes to change that. On International Women's Day, Anne Hathaway's paid leave speech at the U.N. made it clear that if the U.S. is to be considered a civilized nation, it needs to step up its treatment of both mothers and fathers.

Hathaway described her realization, after the birth of her son last year, that Americans are expected to go right back to work after the birth of a child, or else take three months off, unpaid (most U.S. employers are required to provide 12 weeks of leave to new parents, but are not required to provide any pay). "If the practical result of pregnancy is another mouth to feed in your home," said Hathaway, "and America is a country where most people are living paycheck to paycheck, how does 12 weeks unpaid leave economically work?" The answer is, quite simply, that it doesn't. About one-quarter of mothers go back to work just one or two weeks after giving birth, and nearly one-third don't take any time off at all.

And that's just the moms. Another big problem the U.S. needs to work on, according to Hathaway, is the stubborn stereotype that taking care of children is women's work, a notion that "not only discriminates against women, but limits men’s participation and connection within the family and society." Expecting women to be the sole, or even primary caregivers hurts not only women, but men and children, as well. Hathaway recalled her own upbringing by an "unpaid and under-appreciated" stay-at-home mother and a "sole breadwinner" father who had precious little time to spend with his kids.

The fact is that the Family and Medical Leave Act falls way too short. There's still a real stigma against men taking advantage of their legal right to care for their kids, and few men or women can afford take all the time they truly need. The average woman takes 10 weeks off, often using saved-up sick and vacation pay, and most fathers take only two weeks off of work after the birth or adoption of a child. And while some employers choose to offer paid parental leave, they typically offer mothers twice as much as fathers. There have been recent improvements made in a handful of states, but Hathaway is calling for "countries, companies and institutions globally to step up and become champions for paid parental leave." Equal, paid parental leave is better for companies, it's better for families, and it's long overdue.