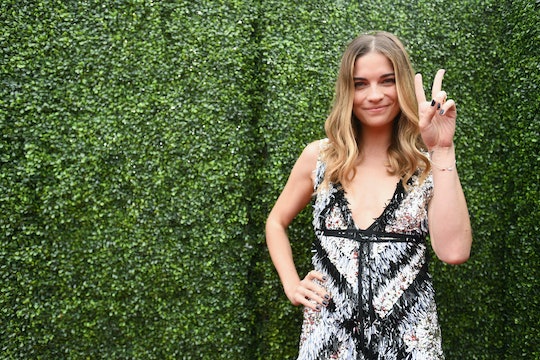 After winning the award for Best Supporting Comedy Actress, Annie Murphy's Emmy win speech was a serious breath of fresh air. On Sunday night, the actress took the opportunity to express her gratitude for Schitt's Creek, the incredibly popular show she's starred on for six seasons, and highlighted why people love it so much.

"The six years that I have spent working on this show have been the best six years of my entire life," Murphy said while accepting her Emmy. "And I am so, so proud of the cast and the crew and the writers and I cannot believe that Eugene Levy and Catherine O'Hara are my friends."

This is the first Emmy award for the actress who plays the very hilarious Alexis Rose on Schitt's Creek. Murphy gave a special shout-out to her co-stars Eugene Levy and Catherine O'Hara, who play her parents Johnny and Moira Rose on the show, in addition to pointing out the show's overall message.

"I'm so proud to be a part of a show that stands for love and kindness and inclusivity and acceptance, because those four things are things that we need more than ever right now," Murphy said. "This is just really, really wild. Thank you so much."

In case you missed the first hour of the Emmys, Schitt's Creek swept up the entire comedy category. That's not too bad for a little Canadian show about a down-on-their-luck rich family that takes up residence in a rural town called Schitt's Creek. A small group of cast members from the show were able to gather at a small, socially distanced event in Toronto on Sunday night where they celebrated all of their major accomplishments together.

While Murphy's speech was amazing in and of itself, watching her co-star and the show's creator Dan Levy in the background of the speech was something else. After the actor grabbed her in the biggest hug once her name was announced, he spent the duration of her speech gushing in silent awe from behind her. And that's not all; in his own acceptance speech after winning Best Supporting Actor, the actor called Murphy his "better half." Now that's the kind of support that people need in 2020.

Levy delivered an equally special speech on Sunday. Like Murphy, Levy touched on the importance of love and kindness. "Our show, at its core, is about the transformational effects of love and acceptance, and that is something we need more of now than we've ever needed before," he said.

If you, like most of us, need a little extra love and kindness right now, you can find the first five seasons of Schitt's Creek on Netflix.