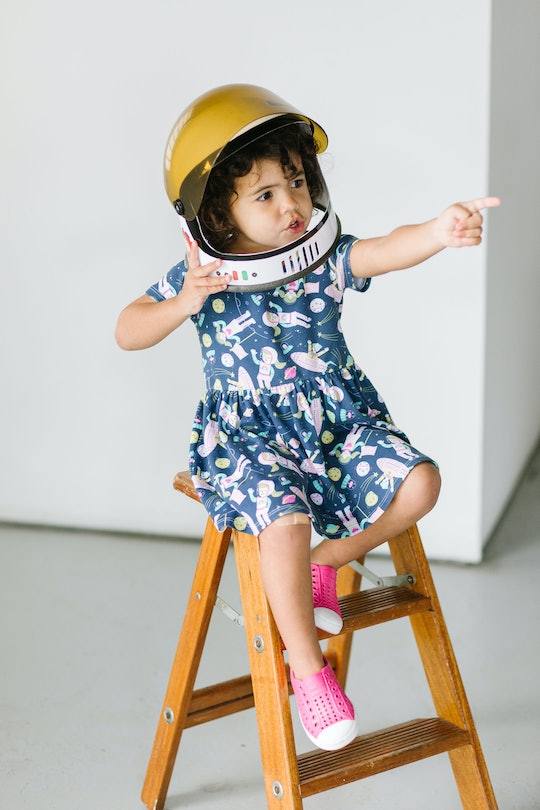 Finding cute and comfortable clothing for little girls can sometimes be a bit of a hassle, especially if your girl doesn't fit the stereotypes that too many marketing gurus apparently still think they should. If tops and dresses emblazoned with princess and ballerina designs get a big old thumbs down from your kiddo, you just might fall in love with the new STEM-inspired clothing line, Annie the Brave.

Too often, clothing with fun science or sports motifs are geared toward boys. So what's a girl to do when she loves those things, but also loves wearing twirly dresses with pops of pink and purple? That's exactly where Annie the Brave comes in.

The line's origin story will absolutely melt your heart. Founder Chelsea Coulston is a mom to two daughters, one of whom has big dreams of being a scientist and requested her mom buy her a "science girl" dress. When Coulston couldn't find a store-bought option, or even fabric that would let her DIY a dress, she took matters into her own hands. Thus, Annie the Brave was born, and there is obvi an official science girl dress now. For Coulston, it wasn't just about satisfying her daughter's fashion whim — it was also about showing her that despite what society may seem to say to the contrary, girls should feel free to enjoy and explore all sorts of interests.

For now, there are three dress designs. The pink Scientist Play Dress depicts lady scientists working hard in their lab with beakers, test tubes, and atoms. Then there's the navy Space Play Dress, which illustrate female astronauts out for a space walk among the planets and stars. Last but not least, there's the aqua Sea Play Dress for the future marine biologist, with a pattern featuring whales, sharks, fish, and more. All three dresses are $35 each, and come in sizes 2T to 8. The site is taking pre-orders now, with items expected to ship around the end of June.

As a mom of a 3-year-old girl, I was totally psyched when I heard about Annie the Brave. After getting a book about space for Easter (this one, if you're curious), my girl is now all about becoming an astronaut when she grows up and fully intends to visit Mars someday. I'm beyond pumped that I now have the option to order her a dress that celebrates that interest. And it seems I won't be the only one making a pre-order — the line got going with a Kickstarter fund that surpassed its goal in 30 days.

The Annie the Brave fall collection is already in the works, with plans for new designs that include dinosaurs, planes, and a construction motif. The company is also planning to expand on their size offerings. The best part, however, may be that they're set to include pockets on future designs. One mom went viral last year after pleading on Twitter for more clothing designers to give girls pockets, according to the HuffPost. After all, where else are they supposed to store all the treasures they rack up during a day of playing and exploring? I'm glad Annie the Brave will be among those answering that call, and I can't wait to see what else they come up with.