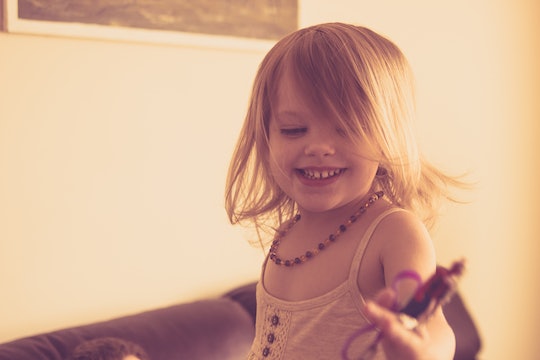 About two months ago, I was at a birthday party for one of the kids my 3-year-old daughter goes to school with. I was also one-week postpartum after the birth of our second child, and chock full of postpartum hormones. I was sitting at a table breastfeeding my newborn daughter when one of the other mothers came and sat across from me. We had never been formally introduced, but we'd given each other the good morning head nod every now and then at school drop off. We said our hellos and proceeded to point out our children to each other. "Oh, Sadie! I know her," she said, adding, "she's the hot-mess hair kid." And my stomach dropped.

Wait, what? Did this mother insult my 3-year-old daughter? Did she just refer to my kid as the hot-mess hair kid? It took every ounce of willpower in my body for me not jump over that table and slap that lady. Hearing her insult my 3-year-old daughter was the last thing I expected to come out of her mouth. There were a million other things she could of said. She could've called Sadie free-spirited or spunky. She could've called her "wild" or "care-free," but instead she called her a hot mess right in front of her own mother. Instead of following my heart and slapping her, I did the more diplomatic thing and laughed. "Yeah, she doesn't like her hair up," I said, and I was surprised by my instantaneous need to defend myself. "I always send her to school with it done up," I added, "and she always comes home with it down."

More than anything, I'd let her know that my daughter is not someone or something to be fixed. She has the rest of her life to learn how and what a woman should look like and how she should behave, and I'd prefer if right now, she got to be a kid.

She proceeded to tell me how she sometimes volunteered at the school, and that she would attempt to put my daughter's hair up because she couldn't stand it being in her face all of the time. Let me repeat: This woman, whose name I had just learned, couldn't stand my daughter's hair being in her face. My husband, who'd been sitting next to me, got up and walked away the minute she started talking. He later told me he had to make himself leave so he didn't share some choice words with her. And somehow I managed to escape the awkward conversation without even being passive-aggressive, either. Because it was a friend's birthday party for her daughter, I didn't want to be the one to cause drama at a toddler's birthday party. But two months later, I am still pissed about it.

I wish I could go back and say something, and stand up for my daughter and myself. I'd tell her that my daughter doesn't like her hair up. I'd remind her that she's 3 years old, much too young to care about what looks good or bad. I'd tell her that I try to put her hair up every morning and that it bothers me, too, when she comes home with it covering her eyes like a sheep dog. But more than anything, I'd like to let her know that my daughter is not someone or something to be fixed. She has the rest of her life to learn how and what a woman should look like and how she should behave, and I'd prefer if she got to be a kid right now. A young, wild, carefree, fearless, free-spirited little girl who doesn't know enough to care or even consider what her "hot-mess hair" says about her.

To be honest, the sad reality is that my daughter is going to spend more of her time worrying about what she looks like than not, and that's perhaps what's most devastating about this whole thing. These young years are so precious because our my kids don't care to impress me or anyone else with their looks. So why should we expect a toddler, just because she's a girl, to be prim and proper when little boys her age can run around and be as rambunctious as they please. The realization that these types of double standards are already taking root in my daughter's life was heartbreaking.

She most certainly is my hot-mess hair kid, and you know what? I absolutely love her that way.

My daughter is hilarious, sweet, charming, fiery, fierce, and everything else you'd expect a toddler to be. She says things like, "That's disgusting!" and "It's not possible!" and she melts my heart when she says, "Sorry, mommy" after I've scolded her for doing something she shouldn't. She loves to play with friends and grab your hand exclaiming, "Follow me, follow me!" She loves to dance and play dress up, and sing "Once Upon a Dream." She lets me paint her nails, and yes, even allows me to braid her hair every now and then. Usually, if I can get her hair up, it's in a quick bun because that's all she will sit still for — but no matter what it always, always, ends up down and in her face. She most certainly is my hot-mess hair kid, and you know what? I absolutely love her that way.

I love this about my daughter because it shows me that, right now, she's still free. Free from caring what the world thinks of her, free from not living or experiencing things because she is too insecure about herself, free of the rules we've created as a culture for girls and women. I wish she could stay this way forever because, as her mother, I know what's coming. I've been a young girl in this very judgmental world, and my fears are even worse for her because she's growing up in the age of social media. I'll do my best to raise Sadie with confidence, but I know she'll inevitably have her moments of self-doubt and judgment. The day will come when she'll spend half of her morning routine doing her hair instead of watching cartoons, where she'll hide away in her room putting makeup on instead of running away from me as I chase her around, desperate to wash the remnants of her breakfast off her face. I know that soon she'll realize that girls and women are expected to present themselves to the world in a certain way.

In the face of all that, I want to show my daughter, both now and as she gets older, that there is nothing wrong with her. There is nothing wrong with being the "hot-mess hair" girl, or the put-together, has-it-all woman. I want Sadie to know that whoever she is, however she is, I will love her completely and fully. I don't want anyone to imprint their worldly expectations on my daughter, especially not a fellow parent at a birthday party for 3-year-olds.