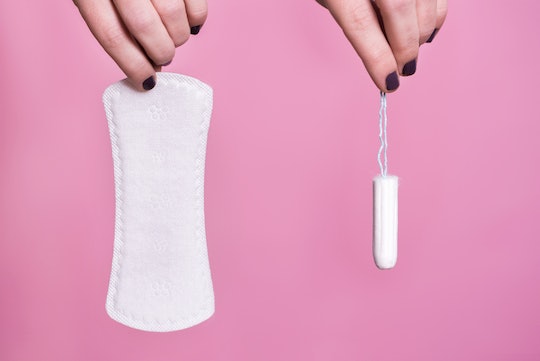 Another State Eliminates The "Pink Tax" On Pads & Tampons, & It's About Time

Luxury taxes (think tobacco, alcohol, cars, jewelry) are common in most states. But, there are still a few consumer items considered luxury that really shouldn't be. Case in point: Tampons and pads. As any woman can tell you, these are necessities and not luxuries. So it would only make sense that so-called "Pink Taxes" are being eliminated in states across that nation. And most recently, voters in Nevada have spoken, marking yet another state to eliminating the Pink Tax on tampons and pads, and honestly, it's about time.

Voters in Nevada approved an amendment the tax act of 1955 and removed the state's 6.85 percent sales tax of feminine hygiene items that are used during menstruation, according to CNN. Now, Nevada joins nine other states and the District of Columbia that no longer recognize the Pink Tax, according to the Las Vegas Patch. These states include: Connecticut, Florida, Illinois, Maryland, Massachusetts, Minnesota, New Jersey, New York, and Pennsylvania.

Something to think about: candy and sodas are exempt for tax in Nevada, according to Marketplace, but feminine hygiene products weren't up until yesterday.

Considering that females start menstruating on average at age 12 and stop around age 55, this seemingly small tax really adds up, according to NBC News. And if every woman in this age bracket spends about $7 to $9 a month on feminine hygiene products, the average tax yield could be upwards of $100 million a year, according to Nevada's state fiscal note.

When it all adds up, that's a lot of significant amount of tax revenue lost for the state. And this may be why it was such a tight race with 56.7 percent of Nevadians voting to do away with the Pink Tax, according to the Reno Gazette Journal. Now, Nevada will have to find a way to make up this income.

A growing number of women's rights advocates are pushing for menstrual equity, as Vox reported. And that's important because lack of proper feminine products can lead to missed work and school as well as health problems if women reuse or overuse unsanitary products, according to Vox.

While many take the accessibility and affordability of feminine hygiene products for granted, there are those who suffer from these increased costs from factors like the Pink Tax. Really, all women suffer from the tax, but those with lower incomes suffer most, as noted by Healthline.

“In order to have a fully impartial and participatory society, laws and policies must ensure that menstrual products are safe, affordable, and available to those who need them,” Jennifer Weiss-Wolf, vice president of the Brennan Center for Justice at NYU School of Law said in a March op-ed at the New York Daily News.

For some, it's just another reminder of the inequality facing today's women. As Molly Rose Lewis of NARAL Pro Choice America explained it in an interview with the Reno Gazette Journal: "It acknowledges the routine unfairness that seeps into women's everyday lives by removing taxes on essential products... Feminine hygiene is not a choice or a luxury but a matter of biology."

While it is expected that other states will eventually follow suit to repeal the so-called Pink Tax, it may be a while before an election that would place the matter on the ballot. So in the meantime, if you live in a state where the Pink Tax still exists, stay informed about how these revenues are being spent and call your local legislature to find out how you can fight them.