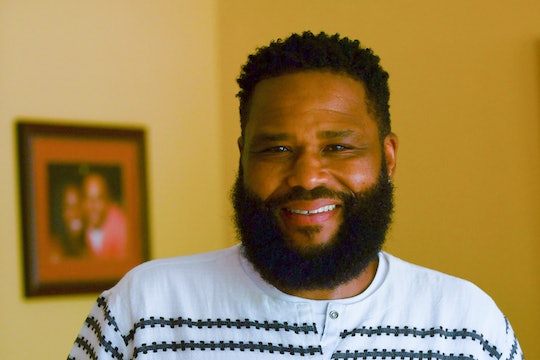 There are a lot of great moments in the world, but few have been as poignant as when black-ish star Anthony Anderson's Black Lives Matter tribute at the Emmys called out racial injustices that have plagued the country for decades and took a swipe at the Trump administration.

"This was supposed to be the Blackest Emmy's ever!" Anderson said during his special appearance at the Emmys on Sunday night. This year's Emmys made history with a record number of Black actors landing Emmy nominations, according to Harper's Bazaar. "These Emmys would have been NBA All Star Weekend and Wakanda all rolled into one," he joked.

The actor delivered his monologue next to the show's host Jimmy Kimmel where he talked about the importance of telling Black stories on TV, like the ones told on the ABC sitcom that he stars in, black-ish. "I'm still rooting for everyone Black, because Black stories, Black performances, and Black lives matter," Anderson said.

The actor led Kimmel and viewers at home in a chant of "Black Lives Matter," with the hopes of the message reaching the vice president. "Louder, Jimmy!" Anderson said. "Say it so that Mike Pence can hear you!"

The nine-time Emmy nominee joked that this year's Emmys should have been "hot sauce in your purse" Black, or "Howard University Homecoming" Black, but couldn't due to the coronavirus pandemic. "Because Black lives matter, Black people will stay at home tonight," he said. "And be safe. But that's fine because guess what? Y'all don't know how to light us anyway."

This isn't the first time Anderson has spoken out against the Trump administration. Anderson said during a Nightline interview in 2017 that he had "sheer surprise" when President Donald Trump was elected in 2016. "We all have to come together to fight for what we believe is fair," he said. "Because some people put their heads in the sand and think it's just going to go away. And it's not."