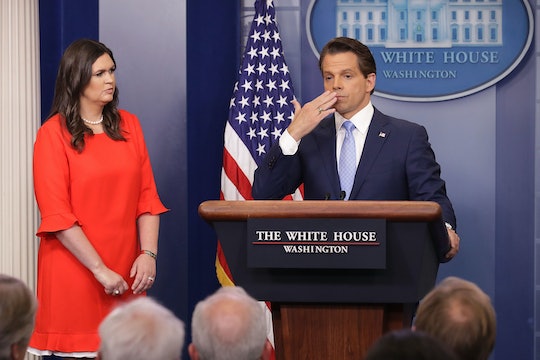 The first days of any new job are never easy, especially when you're the newly appointed communications director of the White House. News outlets announced Anthony Scaramucci as the new communications director on Friday afternoon (along with Sarah Huckabee Sanders as the new press secretary) and the public has had close eyes on him ever since. This role is understandably hard, especially when millions of people are watching to see what you do. But this shouldn't be an excuse for poor behavior. On Sunday morning, during an appearance on CNN, Anthony Scaramucci made a surprisingly sexist comment about Sarah Huckabee Sanders that shouldn't go ignored.

Yes, Scaramucci still has a lot to learn, especially about what to say and what not to say in front of the cameras. During an appearance on CNN's State of the Union, Scaramucci and host Jake Tapper discussed whether or not cameras should be on during press briefings. Scaramucci stated that he wished the cameras would be on during those briefings and that Huckabee Sanders can handle being in the spotlight. "I think Sarah does a great job," Scaramucci said. "She is an incredibly warm person, she's incredibly authentic." But with his praise came a small comment that definitely didn't come across so well.

Scaramucci and the White House did not respond to Romper's request for comment.

Sure, someone could say that Scaramucci has so much confidence in the press secretary and communications department of the White House that the only criticism or comments he has for Huckabee Sanders are about her hair and makeup. But his comment didn't come across that way.

Women experience sexism in the workplace every single day and it disguises itself in different ways. It can be the one-off comments male coworkers make about carrying heavy items, explaining something their female coworkers already know, or even making a comment (no, it's not a compliment) about their hair and makeup. If the press secretary was a man, would Scaramucci suggest the same? Probably not. Twitter users have already taken note of this sexist comment:

Making a comment about a coworker's (or employee's) hair and makeup is problematic, not only because it can be sexist, but because science backs up claims that women are perceived differently depending on what their hair and makeup looks like. In 2015, The Atlantic noted that women who wear makeup earn more money and are treated better. One 2011 study even found that men cited women as being more capable, amiable, and reliable for wearing makeup in the workplace, meaning women received more respect, trust, and affection from co-workers. By making these comments, Scaramucci could potentially be inferring that he would view her or her performance differently depending on what her hair and makeup looked like (kind of like how when women don't wear makeup to work and people comment on how sick or tired they look).

It's not Scaramucci's job or place to comment on Huckabee Sanders' appearance — or any of his female coworkers' looks. With two days on the job under his belt, it's clear that Scaramucci has a lot to learn for the future.