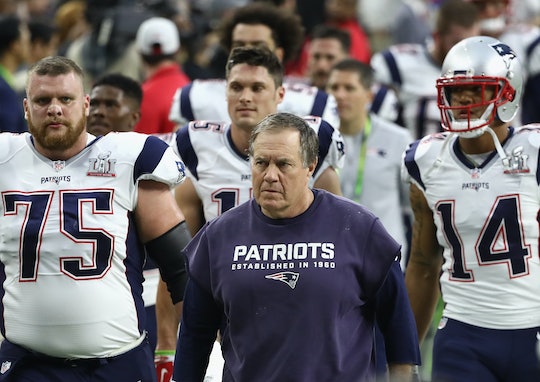 While plenty of football fans gear up for this moment all season, anti-Patriots memes for Super Bowl 51 prove that a bunch of, um, football-fan-adjacent type folks are only tuning in to watch the Atlanta Falcons crush the New England Patriots. For them, as the adage goes, "the enemy of my enemy is my friend," and they're bonding thanks to the help of the internet's greatest artistic medium.

A recent Public Policy Polling survey found that 53 percent of Americans were rooting for the Atlanta Falcons to win, while a measly 27 percent were rooting for the New England Patriots. In a heartwarming display of unity, Republicans, Democrats, and Independents all favored Atlanta in similar numbers. The Falcons had an overall favorability rating of 55 percent, while the Patriots only had a favorability rating of 42 percent. Perhaps that's to be expected, though, for a wealthy, powerful franchise, who has already won five out of seven Super Bowl runs, and is plagued by cheating scandals. (I'll spare you deflate-gate jokes, since there are plenty of those in the memes to come.) The Atlanta Falcons, conversely, have never won a Super Bowl, despite a run at it in 1999.

Adding fuel to the fire is the fact that the Patriots have, according to SBNation, "the closest connection to the Republican president of any NFL team," while Atlanta is, as Michael Che put it during Saturday Night Live's Weekend Update on the eve of the game, "the blackest city in America." The Patriots' close ties to Trump threatened to pour salt in a very fresh wound if they won and social media was quick to take sides.

Even George H.W. Bush's procession out onto the field for the Super Bowl coin toss in his home state of Texas got an anti-Patriots makeover.

Unfortunately, in spite of an 18-point lead in Atlanta's favor at halftime, the New England Patriots caught up to tie up the game just as the fourth quarter came to a close. The Super Bowl went into overtime and the Patriots scored a touchdown pretty quickly, to most of America's shock and dismay (to say nothing of the gutpunch and devastation suffered by Atlanta fans). Comparisons to the 2016 election were swift, and guess who chimed in to congratulate New England? You guessed it.

This one final tweet pretty much sums up everything.

It was an expected loss to say the least, but you can't say that it didn't make for an interesting and action-packed game, even for those of us who aren't normally invested in such things.