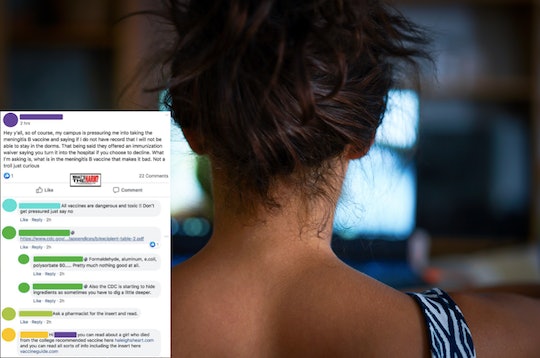 Going Undercover As An Anti-Vaxxer

Misty Konkrasang, a mom to an almost 3-year-old son, starts her morning like any other busy parent. Breakfast. Shower. Convince a headstrong toddler that, yes, pants are necessary when going out in public. Daycare drop-off. But before she walks out the door, she spends about 30 minutes on Facebook... pretending to be someone else.

Someone who doesn't believe in vaccines.

"We have soft accounts — fake Facebook profiles that we set up," Konkrasang tells Romper via phone. "We cultivate them, we put photos in them, we create characters for them, make them look as real as possible, and we go into these groups — different kinds of anti-vaccination groups, natural health groups, home birthing groups. Mostly we focus on vaccination, but really it’s all aspects of natural health because there are a lot of extremists everywhere."

Konkrasang is one of 10 to 15 admins for What's The Harm, a pro-vaccine Facebook group dedicated to highlighting the harm caused by anti-vaccination advocates, profiled by CNN on March, 21, 2019. Like many of the admins, Konkrasang uses the fake Facebook profiles she creates to "infiltrate" anti-vaccination (aka "anti-vaxx") Facebook groups, like Stop Mandatory Vaccination, which has a reported 160,000 members, according to a March 2019 report by CNN. By pretending to be an anti-vaxxer, Konkrasang can inform parents when their children's pictures are being used for nefarious reasons, give parents a heads-up if they're about to be the target of anti-vaccination hate, and report pediatricians and other physicians who are selling medical exemptions for vaccinations to anti-vaxx parents.

Measles was eliminated in the U.S. in 2000, according to the Centers for Disease Control and Prevention (CDC). But between Jan. 1 and April 26, 2019, 704 individual cases of measles across 26 states were reported. That almost doubles the amount of cases confirmed in 2018, and is the highest number reported since 1992, according to The New York Times. (At the time of publication, there are now 981 individual cases of measles reported.) In April, New York City declared a public health emergency after a Measles outbreak in Williamsburg, Brooklyn, a predominately Jewish Orthodox area where parents do not vaccinate their children for religious reasons. In January, Gov. Jay Inslee of Washington State declared a state of emergency after 55 cases of measles were confirmed, many of which were involved unvaccinated children under 10.

"They’ll see a post of a baby that has died, immediately share it to the group, and they’ll say, 'Oh, well, vaccines did it.'"

"The driving force behind the main anti-vaccination movement is social media," Konkrasang, a full-time student living in Tennessee and married to an active-duty soldier, tells me. "It’s Facebook — it really is Facebook. There’s stuff on YouTube, but the driving force behind it is Facebook." In March of this year, Facebook vowed to combat the spread of anti-vaccination misinformation and pseudo-science by "reducing the distribution of misleading medical advice and relying on vetting from leading global health organization that have publicly identified verifiable vaccine hoaxes," as reported by NPR. And in February, YouTube banned channels that promote anti-vaccination messaging from running advertisements, according to The Hill.

A spokesperson for Facebook tells Romper that the company is "working hard on this important issue, but making sure we are identifying vaccine misinformation accurately." Facebook does not decide what constitutes vaccination misinformation and what doesn't, but, instead, is "working with health organizations directly and working methodically to understand and navigate the sensitivities in this space." Facebook laid out its policy on combating vaccine misinformation in an online post from Monika Bickert, Facebook's Vice President of Global Policy Management, in March of this year.

"You used to be able to go on a news post about vaccinations and you'd see just one or two comments that were anti-vaxx. But it started growing and now you can go to any news story from any news station in the country, and you'll see that most of the comments — or at least half — are anti-vaccination. It has just started getting bigger and bigger."

Konkrasang says she was first introduced to anti-vaxxers when she was pregnant with her son. "I joined a mom group and was immediately bombarded with 'don't vaccinate your kids.' And my first reaction was: wow, that's strange. If vaccines are just harmful, then why would every governing body on the planet recommend them? It just didn't make any sense."

So she started speaking with parents who vaccinate their children, and after seeing just how much misinformation was floating around the internet, felt compelled to get involved somehow. In no time, Konkrasang was devoting her spare moments to arguing with anti-vaccination advocates online. "It’s common for me to be arguing or refuting what they’re saying, and there be 400 or 500 comments back and forth between the two of us," she says.

Her dedication to combating the anti-vaccination movement goes far beyond her computer screen, too. "I actually changed careers because of this," she tells me. "I went back to school to become a nurse. My involvement in this — this is something I'm pretty passionate about."

It's scary when you're a new parent, brand new, and you want to protect your child. It just puts doubt in your mind.

So now, in between dropping her son off at daycare, attending class, and completing classwork ("Between 2 p.m. and 5 p.m. I will have time to do homework, and I kind of do both at the same time," she says. "Or late at night, when I’m in bed. Or after dinner. Or when I'm cooking dinner. I will break it up to 15-, 20-minute increments, or something like that."), Konkrasang dedicates her time to undermining the anti-vaccination movement's online reach and influence.

"They’re very much the minority, but they’re loud," she says. "They’re very loud and they’re very opinionated, and that’s why we do what we do because of how loud they are."

Konkrasang says she has reported two doctors in California who have sold medical-exemption licenses to anti-vaccination parents ("Anti-vaxxers post in Stop Mandatory Vaccination, 'Hey, look what I got! Here’s my medical exemption!' They said it costs $200, so I screenshot it and sent it to the board of medicine in California.") and has alerted parents that anti-vaxxers are using their children's likeness to push their agenda ("There’s really nothing we can do to combat it, other than letting the parents know. Some parents are receptive. I’ve received a lot of Thank Yous. I have them all in my inbox."), and has alerted parents of deceased children that anti-vaxxers planned on targeting them, claiming immunizations caused their child's death ("They’ll see a post of a baby that has died, immediately share it to the group, and they’ll say, 'Oh, well, vaccines did it.' And then they go after these parents, and these parents get convinced that vaccines killed their child. We look out for things like that, try to give parents head’s up.").

But she believes things are "going to get worse" before they get better, especially since the anti-vaccination movement feels like "a dog in a corner."

"They were all, 'Yay, Trump!' for his anti-vaccination mess," she says, referring to President Donald Trump tweeting in 2014, "Healthy young child goes to doctor, gets pumped with massive shot of many vaccines, doesn't feel good and changes - AUTISM. Many such cases!"

"They were excited that he was coming into office, because they thought he would get rid of the need to be vaccinated in order to go to school," she says. "And of course, he didn't. And of course, he isn't anti-vaccine." In April, the president said parents should vaccinate their children, The president is also planning to issue an executive order, directing the department of Health and Human Services to improve the flu vaccine and encourage people to get vaccinated, as reported by Kaiser Health News.

People haven't seen these illnesses before because we’ve vaccinated — we’ve made it a distant memory.

Of course, Konkrasang doesn't blame the parents who fall prey to the anti-vaccination movement's pseudo-science. When now-debunked studies are shared, or even legitimate studies where the scientific findings have been purposefully contorted, it's difficult, if not impossible, to combat.

"It's scary when you're a new parent, brand new, and you want to protect your child. It just puts doubt in your mind. It plants a seed, because you can’t see what you’re protecting your child against," Konkrasang tells me. She plans on continuing her online activism as she works to obtain her nursing degree, and has no plans of slowing down after she becomes a nurse, either.

More Like This
I Took Drinking Out Of My Bedtime Ritual & Unfortunately, It's Great
Weed Moms Are Changing The Culture Around Marijuana
My C-Section Almost Derailed My 5th-Degree Back Belt — Almost.
My Slowest Marathon Ever Is The One That Makes Me Most Proud
What Parents Are Talking About — Delivered Straight To Your Inbox