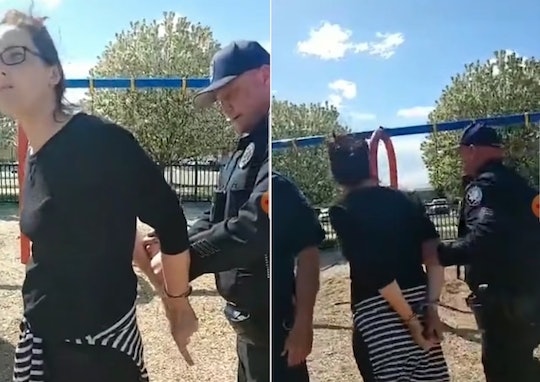 An anti-vaccination activist in Idaho, who was filmed telling police to arrest her last week during a planned protest against the state's stay-at-home order, received exactly what she asked for — her arrest. Sara Brady was arrested for trespassing at a playground that had been shuttered by the city in an effort to limit the spread of the novel coronavirus. And video of the anti-vaxxer mom's playground protest arrest has since gone viral, sparking debate about state-ordered restrictions and the need to adhere to public health recommendations.

According to The Idaho Statesman, Brady and her children were one of a handful of families who'd gathered Tuesday at Julius M. Kleiner Memorial Park in Meridian, Idaho, to protest the state's stay-at-home order and social distancing closures. In a press release put out shortly after Brady's arrest, Meridian Police said they'd received "several calls" about the group's presence in the park and arrived to find that caution tape and metal signs announcing the playground was closed due to the coronavirus had been removed.

"Officers informed those gathered several times that the play structure was closed, and that they were welcome to utilize other areas of the park if they chose," a press release read. "After being told to leave the playground multiple times, 40-year-old Sarah Brady of Meridian refused to leave and was arrested for one count misdemeanor trespassing."

In video of Brady's arrest, which was streamed live on Facebook and has since been shared across a number of social media networks, Brady can clearly be heard telling one of the responding officers to arrest her. "Arrest me for being in the park. Do it," she said while walking up to the officer, turning around and placing her hands behind her back.

Brady then ordered her fellow protesters to "record" her arrest and call the Idaho Freedom Foundation, an organization that defines itself as a "non-partisan educational research institute" but clearly advocates for libertarian political ideals and has recently been encouraging its supporters to disobey Idaho's stay-at-home order. (In a Medium post, the foundation distanced itself from Brady and her fellow protesters, noting that although they knew of the protest, they had not promoted it nor attended.)

In its press release, the Meridian Police Department noted that its officers "made several attempts to help Brady adhere to the rules" but that Brady was, ultimately, "non-compliant and forced officers to place her under arrest to resolve the issue."

"These are very trying times and the Meridian Police Department supports the public's right to assemble for peaceful protest, however the right does not include damaging public property or ignoring closures of City property and facilities," the police department said.

This isn't the first time Brady has captured headlines. In 2017, her disagreement with a school district over immunization exemption forms garnered headlines. According to MarketWatch, Brady is also involved in the anti-vaxxer group, Idahoans for Vaccine Freedom.

Since her release, Brady appears to have made some contradictory statements. While speaking to reporters outside Meridian City Hall on Friday, she said her presence on the closed playground wasn't intended to be a protest. "I never had any intention of going to the park to protest or to make any type of political or public statement," Brady said, according to KTVB7. According to the news outlet, Brady also claimed she "did not see any signs that prohibited playing on the playground."

However, after being released by police on Tuesday, Brady greeted supporters waiting for her with a Thomas Jefferson quote, implying the government had become oppressive as a result of the coronavirus outbreak. "I didn't wake up today thinking, 'I'll take my kids to the park and get arrested,' but when tyranny becomes law, rebellion becomes duty," Brady can be heard telling supporters in a Facebook Live video. "We have a duty to stand up to the tyranny or we're going to lose our Republic."

As of April 27, the state of Idaho has 1,897 confirmed cases of coronavirus and 56 deaths. A statewide stay-at-home order is still in effect.

According to KTVB7, one of Brady's supporters later doxxed the officer who arrested her, posting his name and home address online and holding a protest outside the officer's home. On Friday, Brady told reporters she had no part in the protest organized against the arresting officer.

As video of her arrest continues to go viral, Brady has become a symbol for those who view state-ordered closures in light of the coronavirus to be government overreach. As a result, some governors have moved to re-open their states despite warnings from public health officials that doing so could send infections skyrocketing.