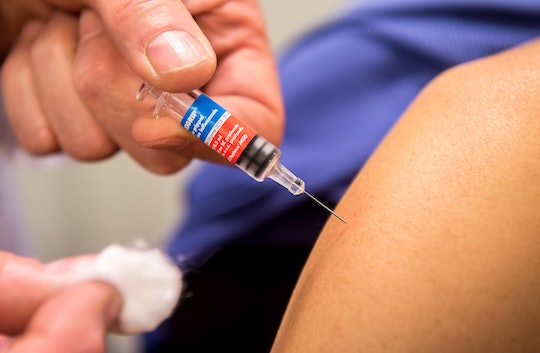 Over the last few months, Minnesota has experienced its worst measles outbreak in nearly three decades, according to The Washington Post. Public health officials believe the outbreak is connected to the increase in unvaccinated children — a rising trend across the United States. Despite the massive outbreak, Minnesota anti-vaxxers are holding "measles parties" for unvaccinated kids as a way to boost "their natural resistance." But that's playing a dangerous game, because the idea that resistance builds through exposure is totally false.

According to Fatherly, anti-vaxxers in Minnesota have taken to social media, primarily Facebook groups, to propose "measles parties." The premise is simple, albeit misguided: At these gatherings, kids who haven't been immunized would be exposed to the disease so that they would become infected and, thus, "build up" immunity. It's similar to the idea behind "chicken pox parties," which were highly popular among parents before the pox vaccine was introduced in the United States in 1995, according to ThinkProgress.

But intentionally exposing your kids to measles — a serious and highly contagious illness — is harmful. According to CBS Los Angeles, California public health officials warned parents against the "natural infection" practice back in 2015, saying that the tactic “unnecessarily places the exposed children at potentially grave risk and could contribute to further spread of the outbreak.”

The warning from California health officials came after the state saw its own measles outbreak at Disneyland in 2014. According to the Los Angeles Times, California's Department of Public Health linked the outbreak to parents opting not to vaccinate against the disease.

Other measles outbreaks have occurred across the United States since the U.S. Centers for Disease Control and Prevention declared the disease eliminated from the country in 2000. The CDC documented a record number of more than 660 measles cases from 27 states in the last 16 years.

The advisory from public health officials is not without reason. According to ThinkProgress, back in the 1900s, some parents purposely infected their children with measles, and all those children died from the disease. That's because measles in young children is especially dangerous, and can lead to pneumonia, lifelong brain damage, deafness, and death, according to the CDC. The World Health Organization ranks measles as one of the leading causes of death among young children around the world; 134,200 people, mostly kids younger than 5 years old, died from measles in 2015.

So why would any parent propose a "measles party"? Because anti-vaxxers are convinced that the measles-mumps-rubella (MMR) shot causes autism — a conspiracy theory backed by discredited research. Yet, despite scientific evidence proving otherwise, people in the anti-vaxx movement continue to push this debunked link. And that's causing a serious, highly contagious, and potentially fatal respiratory disease to make a comeback.