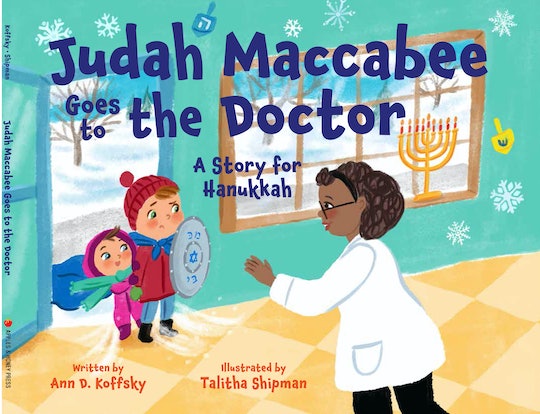 Even though scientific evidence has proven that there is no correlation between vaccinations and autism, there are still plenty of "anti-vaxxers" out there who believe otherwise. Case in point? The reviews section of Judah Maccabee Goes to the Doctor: A Story for Hanukkah on Amazon. The children's book, written by Ann D. Koffsky and illustrated by Talitha Shipman, was released in late 2017, as reported by the Washington Post. Shortly after the book was posted on Amazon, anti-vaxxers flooded it with bad reviews to promote an anti-vaccination agenda — and it's pretty worrisome.

Koffsky, an Orthodox Jewish author, was inspired to write the book after hearing that Jewish families refused to vaccinate their children due to "religious exemptions," as noted by the Washington Post. Koffsky spoke with Romper over the phone, where she further explained that the driving force behind Judah Maccabee Goes to the Doctor were people who used Judaism as an excuse for not vaccinating their kids.

"I was a little disappointed that people in my community were using the 'religious exemption' as the reason that they weren't vaccinating," she tells Romper. "I found that that was a distortion of Jewish values." While Koffsky is pro-vaccination, she respects every parent's right to decide whether to vaccinate their kids — unless their excuse is "religion exemption." So because she observed people in her community using this excuse, she decided to make Judaism a central theme in the book.

In fact, in the Jewish religion, protecting your health is not only of high importance, but it's also a mitzvah (a good deed), as explained by Chabad.org. The Union of Reformed Judaism also states on its website, "the preservation of life takes precedence over almost all other Jewish laws."

However, the very anti-vaxxers Koffsky hoped to educate with her book had the opposite response she was aiming for. Koffsy's Amazon listing was quickly hit with an influx of one-star reviews.

Some reviewers accused Koffsky of ties to Big Pharma. "Buy this book if you have ties to the big pharma / medical brainwashing," commented one reviewer in November. Koffsky ensures Romper that she is not in the pocket of Big Pharma. "Where's my check?" she jokes over the phone.

Other reviewers accused the book of being propaganda. "Why waste your hard earned $ on old fashioned propaganda," commented one user. "This book is utter propaganda. Do your own research. Educate before you vaccinate," wrote another.

As pointed out by the CDC, there is no link between vaccines and autism (nor the MMR diseases: measles, mumps, and rubella), and that assertion has been backed up by a number of scientific studies. The belief that there is a link stems from a widely-discredited 1998 study by Dr. Andrew Wakefield, according to SAGE Journals. It took 10 years of investigation for experts to finally prove that Wakefield's paper left him guilty of "ethical, medical, and scientific misconduct," though the study clearly had lasting effects on whether people would voluntarily vaccinate their children.

When Koffsky saw the negative reviews beginning to flood her Amazon listing, she was shocked — but also a little amused. She tells Romper:

I was just kind of flabbergasted... if people were commenting respectfully, you know, "Let's have a thoughtful dialogue about why we are nervous about vaccines, or why we're concerned about them..." They weren't interested in having a discussion ... I'm sure there are ways to argue about it thoughtfully, and that's not what was happening. And it was almost funny. I mean, it was funny! ... It showed a lot more about them than it did about me.

In response to the hate, Koffsky tells Romper that she reached out to her Facebook friends, as well as contacts at some pro-vaccination blogs. She asked those who were familiar with the book to rate and review it on Amazon. Her plea worked, as 88 percent of the reviews now have five stars. "I was very fortunate that people came to my rescue," she tells Romper.

For one, the anti-vaxxer response to Koffsky's book reminds the medical and parenting worlds that pseudoscience is still pervasive. Many people believe vaccines are dangerous or that religion and personal beliefs should be a reason not to get vaccines, and that puts other children — some who may not be able to receive vaccines because they're immunocompromised — even more at risk.

Otherwise, the book seems to have had a positive impact, namely on children who are afraid of getting vaccines via shots. She recalls a recent Facebook message she received from a friend who has a 7-year-old son. After being informed he would be getting a shot, he looked up at his mother from his chair in the doctor's office's waiting room and said, "You mean like Judah and Hannah?" referring to the characters in Judah Maccabee Goes to the Doctor. As Koffsky puts it: "That's what matters."