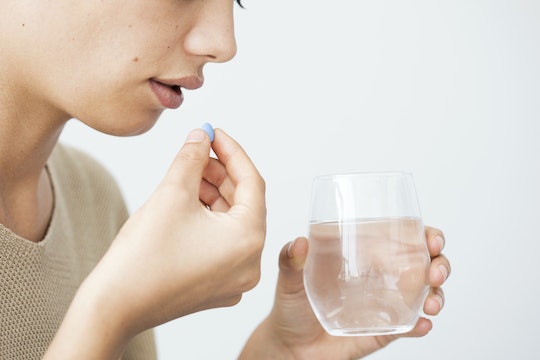 Mental illness is incredibly common, but you wouldn't necessarily know it from the way we talk about it — or from the way we approach treatment methods. Depression, for one, is the leading cause of disability worldwide, according to the World Health Organization, yet there's still a lingering sense that it's not actually real, or that people shouldn't "rely" on medication to treat it the way we do with other illnesses. Over the years, there has been much debate over whether antidepressant medications are even effective, but a major study found antidepressants really do work better than a placebo. And the results suggest that, maybe, just maybe, it's time to accept that no one should ever have to feel ashamed for treating their mental illness with drugs.

The study, led by Dr. Andrea Cipriani of the NIHR Oxford Health Biomedical Research Centre in the U.K., was a "systematic review and network meta-analysis" that looked at 21 different commonly used antidepressants in order to compare and rank them depending on how effective they were at treating acute major depressive disorder. And the findings, published in The Lancet Wednesday, revealed something that many depression sufferers have long known to be true: that antidepressant medication really does make a difference when it comes to treating depression — and that, like the illness itself, the effect wasn't just "all in their heads."

While there are many enduring misconceptions about antidepressant medication in general, one of the main issues researchers looked to address with the study is that, even in the medical community, there is debate about whether medication is truly effective. The study itself took six years to complete, according to The Guardian, and "included all the published and unpublished data that the scientists could find" that compared either a specific drug to a placebo, or two different drugs against each other (there were more than 500 drug trials in total). And though some of the drugs emerged as being more effective and generally better-tolerated than others, even the drugs shown to be least effective still proved to be worthwhile for those suffering from depression.

The drugs that came out on top in the study included agomelatine (Valdoxan), escitalopram (Lexapro), and vortioxetine (Trintellix), while other drugs, like fluoxetine (Prozac), were found to be less effective — or, in the case of drugs like amitriptyline (Elavil), were found to be less tolerable despite being highly effective. Not only is that information valuable to reinforce the idea that antidepressants work, it can also help doctors better determine which medication options might be best as first-line treatment options (that is, the ones that are more likely to give the best results with the fewest side effects). Since different patients react differently to different drugs, however, the most important takeaway seems to be that, regardless of ranking, all of the drugs studied are better for treating depression than nothing at all.

Even though major depressive disorder is a hugely debilitating issue, there's a pretty significant void when it comes to effective and accessible treatment options. In 2016, roughly 16.2 million adults in the United States had at least one major depressive episode, according to the National Institute of Mental Health, and 10.3 million reported "severe impairment" as a result of their illness. Yet even though antidepressant use is on the rise — between 1999 and 2014, antidepressant use increased by 65 percent, according to CBS News — more than one-third of adults who suffered from major depressive disorder in 2016 did not receive any treatment at all for their illness. In other words, there's definitely still a long way to go.

Of course, antidepressant medication isn't the only option when it comes to treatment, and it also isn't a magical cure. As with any medication, the user can experience side effects. Antidepressants also often take time to work, and according to TIME, in some cases, medication doesn't help at all. Talk therapy — specifically cognitive behavioral therapy, or CBT — has been shown to be as effective as antidepressant medication as a treatment option, according to Science Daily, meaning there are certainly other ways to treat depression that don't involve pills. But the cost involved in therapy, as well as the time commitment, can be big barriers for those in need of help, once again putting far too many people at risk for unnecessary suffering.

What does seem clear though is that, when it comes to acute depression, there are many misconceptions about antidepressants. Many have argued that they they don't work or are unnecessary — in 2010, Dr. Mark Hyman even argued in an article for The Huffington Post that patients have been "deceived by the Antidepressant Hoax," and that they can otherwise treat their depression with vitamin supplements and an "anti-inflammatory elimination diet," which might be a bit ambitious when you're struggling to even get out of bed in the morning. Then there's the frustratingly persistent idea that antidepressants are just part of an elaborate money-making scheme led by Big Pharma, with some going as far to suggest that taking antidepressants is akin to being hooked on opioids (not true, according to WebMD, although you can experience withdrawal symptoms if you stop an antidepressant abruptly). But while antidepressants don't offer an easy quick fix solution for everyone, the study does make a solid case that there is at least measurable value in trying medication to ease depressive symptoms, and that, by extension, there is no reason why antidepressant use should be dismissed as not being legitimate or worthwhile.

That message is one that might take a while to sink in, but it's also one that really, really matters. When it comes to treating mental illness, fighting the stigma that suggests there's something shameful or wrong about reaching out for help or "needing medication" to live a happy, healthy life is invaluable — and in many cases, literally life-saving. Thanks to the study, we now at least have clear and solid medical evidence that can help disprove those harmful messages. And hopefully that will mean fewer people will end up feeling afraid or guilty for accepting the help they deserve.