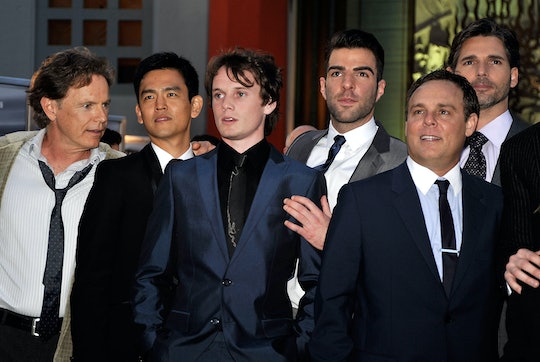 Anton Yelchin's Co-stars React To His Death With Heartbreaking Messages

Early Sunday morning, Star Trek actor Anton Yelchin died in a traffic collision in Los Angeles, according to a report by TMZ, which was later confirmed by the actor's reps in a statement to BuzzFeed. The 27-year-old was well-known for starring in the revamped Star Trek films — the latest of which will be released this July — and indie thrillers such as Alpha Dog. As news began hitting headlines on Sunday, Yelchin's Star Trek co-stars reacted to his death with heartbreaking messages of their own.

According to People, the Los Angeles County Medical Examiner's office confirmed that Yelchin's body was found pinned between a driveway gate and a car. While no cause of death has been officially declared yet, a medical examiner reportedly told People that the vehicle was not properly parked before Yelchin walked behind it. He was found with head and chest injuries and pronounced dead at 1:10 a.m. on Sunday.

The Russian-born actor was well-loved and admired by co-workers and fans, and was known for his varying interests. Aside from acting, Yelchin was interested in photography, wrote his own film script at 16, and played the piano. Co-stars' messages about Yelchin after his death showed that he was incredibly well-respected in the acting community, and loved by many who worked with him.

Stars also weighed in on Instagram. Zachary Quinto, who starred alongside Yelchin in the Star Trek films, captioned a picture of Yelchin with:

our dear friend. our comrade. our anton. one of the most open and intellectually curious people i have ever had the pleasure to know. so enormously talented and generous of heart. wise beyond his years. and gone before his time. all love and strength to his family at this impossible time of grief.

Tyler Hilton, who joined Yelchin in Charlie Bartlett in 2007, also shared his thoughts on Instagram, writing:

Please tell me this isn't real. Not Anton. Not the poet, musician, incredible actor, and supremely special guy I knew. I've been shocked into silence all morning.

Director Guillermo del Toro, who was working with Yelchin on the upcoming Netflix animated series Trollhunters, tweeted on Sunday, "As far as I am concerned, 2016 cannot end fast enough." It's been a rough year of losses, and the death of the far-too-young Yelchin makes it all feel very real.

According to Variety, Yelchin's representative released a statement requesting privacy for his family. Co-stars and fans expressed sympathy for his family while sharing their love for Yelchin on social media, honoring a great actor taken too soon.