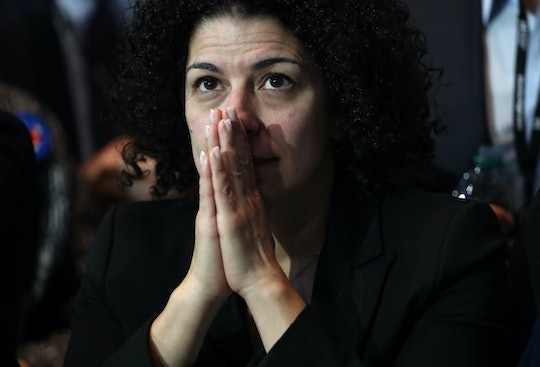 It might be a good idea for Americans to embrace a little meditation or super calming breathing techniques on election night. Because if you look on social media you'll find some anxious tweets showing America is really, really stressed about the election right now.

According to surveys released in late October by the American Psychological Association, it was found that 52 percent of American adults have said this year's election has caused a significant amount of stress, and it didn't matter if they were Republican or Democrat. The stress wasn't necessarily different for each party, but it was different between men and women. According to an NBC News Poll published in late October, 51 percent of women reported having election-related stress versus 39 percent of men. Melissa Lester Olson, an Atlanta-based psychotherapist, told Time that she's been seeing an increase in the levels and types of stress symptoms she has been seeing lately.

"More than one client of mine has talked of physical nausea that they relate directly to current political happenings, " Melissa Lester Olson said. "Women who I have seen for years are only now bringing up physical and sexual trauma from their past. I think this election is re-traumatizing them."

Olson noted that there have been many reminders in this election of emotional abuse, physical abuse, sexual abuse, rape and discrimination at work and at home. She said that women experience these things often.

Another indicator of America's stress level during the 2016 election year is social media where many people are confessing their anxiety. Take this one for example that will make people realize how much their nerves are causing their tongues to stick tightly to the tops of their mouths.

This tweet captures how many people must feel while watching the numbers come in by the second on their many devices.

Many people who want to take the edge off a bit this election have confessed to wanting to drink a little booze (OK, maybe a lot).

The other way to deal with stress is to simply eat your way through it.

If you're not eating or drinking your way through the election, you can always color through it.

Or royally mess up your manicure.

If you're the yogi type, it might be a good idea to use all of the techniques you've learned or pack in a lot of classes in the coming weeks.

Fetal position or rolling up in a ball is also a legit position for those stressed to the max.

Everyone has different coping mechanisms, but maybe the easiest thing you can do is simply breathe. It will all be over soon and then we can all go stress out about what to do next and how to live post election.