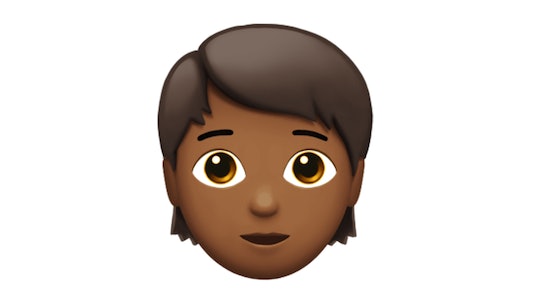 A Gender-Neutral Emoji Is Coming To Apple Soon, & It's So Important

If you're of a certain generation, you might use emoji as a sort of second language. Pull up your "frequently used" selections and you'll probably see emoji representing your favorite foods and hobbies, as well as you and your loved ones... If you all happen to present as a woman or a man, that is. Until now, non-binary people and gender non-conforming people have been left out of the mix, and that's why it's so cool that Apple is introducing gender-neutral emoji, because whether it's in government or a cartoon texting shorthand, everyone deserves equal representation.

Of course, nobody expects to find an exact replica of themselves from the limited options available; as someone who can't find a match for their hair color even in the cartoon world, I get that. It's a little annoying, but it's not hurtful. I can at least manage a reasonable facsimile of myself. But when there are only two gender options and neither one is yours, that's something altogether different. When society completely erases your identity from every arena, it can be hard not to feel shunned. Admittedly, emoji are only one tiny step, but it's a step forward, nonetheless, so let's celebrate this small victory.

If you're not an iPhone user, there's no need to feel left out; Apple is just introducing its specific take on the gender-neutral emoji, which was part of the Unicode 10 update back in June. Unicode is the international standard for coding letters, numbers, symbols, and for the last seven years, emoji. Similar to the way a letter can be represented by many fonts, different platforms have slightly different interpretations of emoji, which is why the grin you type on your Android phone looks like a grimace when you post it on Facebook. Unicode 10 has already been implemented on Android and Twitter.

There are actually 15 new gender-neutral emoji in Unicode 10, and Apple's version of it: five children, five adults, and five elderly people of varying skin tones. Also included in the update are the breastfeeding emoji and the hijab-wearing emoji announced last November, as well as a zombie, a vampire, broccoli, a giraffe, and dozens more. According to Apple, the new emoji will roll out in public beta testing for iOS 11.1 on Monday, Oct. 9, and users can expect to see them in an upcoming software update.

Although mermaids and dinosaurs and Chinese takeout boxes are fun, it's the gender-neutral emoji that really matter. Including them is a step toward normalizing non-binary and gender non-conforming identities, a concept that too many people are unfamiliar or even uncomfortable with. Washington, D.C., and Oregon are already issuing non-binary drivers' licenses (and California may be next), but we're still arguing about whether a singular "they" is grammatically correct. Spoiler alert: it is, and it always has been. "Someone left their umbrella in this taxi. I hope they don't get caught in the rain."

Non-binary, gender fluid, or genderqueer people exist, and no amount of transphobic arguing or ignoring them is going to change that. They deserve a seat at the table, a voice, and yes, even an emoji. It's not over the top political correctness to make sure they're represented everywhere, because they are everywhere, and they're entitled to anything and everything binary people are entitled to, no matter how great or small. It might not make a difference on your phone, but to someone whose very identity has been consistently discredited by society as a whole, it matters a lot. Granted, non-binary bathrooms are more of an urgent need than emoji, but hey, at least it's a start.