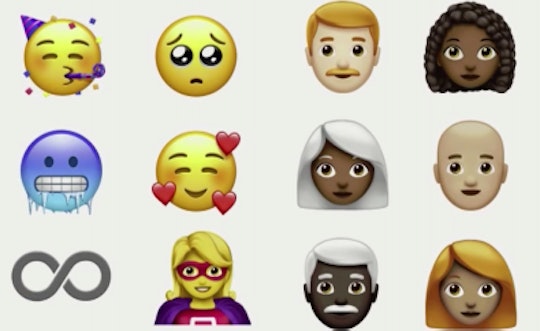 There Are 70+ New Emojis Coming To An iPhone Near You

To celebrate “World Emoji Day” on Tuesday, Apple unveiled 70+ new emojis on Monday, and you're going to want to start using them as soon as possible. But if you opened your iPhone and went looking for a redheaded woman or a peacock to use in a text message Tuesday morning, you were probably disappointed. That's because the new emoji characters are coming to iPhone, iPad, Apple Watch, and Mac later this year as part of a free software update, according to Apple. In other words, it might be World Emoji Day, but these new emojis aren't available to use just yet.

World Emoji Day was created by Emojipedia founder Jeremy Burge in 2014, and the point of the emoji holiday is to "promote the use emojis and spread the 😋 enjoyment that they bring to all of those 👬👫👭 around us." And Apple apparently decided to get in on the fun by sharing a first look at the new emoji designs Apple product users will see on their keyboards in the near future, according to Digital Trends.

The latest emoji additions are based on Unicode Version 11.0, which includes more than 150 new emojis, Digital Trends reported. But on Monday, Apple only previewed some of its 70 new emojis, KDKA 2 CBS Pittsburgh reported.

For starters, the new emojis will include several new hairstyles, CNN Money reported. Some more popular emojis will now be able to have new curly hair, red hair, gray hair, or no hair at all. Ginger emojis have finally arrived! Burge said of this development, according to CNN Money:

As always, some of the most vocal requests for new emojis are about representation, and this update delivers some of the most common requests. In particular the redheads and curly haired options are likely to be popular.

The emoji choices in smiley faces will expand as well, Digital Trends reported. For instance, there’s a cold face with icicles hanging off, which I can see people using a lot during the cold winter months. There's also a party face featuring a party hat, noisemaker, and confetti included. Plus, there's a face with hearts, and a big-eyed pleading face.

The new emojis will also include animals: a parrot, kangaroo, lobster, and peacock will all join the rest of the zoo emoji users can already access. New food is being added as well: a mango, a bunch of lettuce, a cupcake, and mooncake emojis will help you express in a text message exactly what food you're craving.

An Apple Newsroom update also reported that a new superhero emoji, a softball, nazar amulet, and infinity symbol are among the new emojis Apple is adding.

One kind of emoji that probably won't be among Apple's additions are ones for disability representation. In March, Apple said it wanted to bring in emojis that represent people with disabilities better, and suggested things like wheelchair users, a guide dog, and a hearing aid to the Unicode Consortium, according to the BBC.

However, while Unicode agreed with Apple, and promised to introduce some of the disability emoji suggestions, it won't happen until 2019, the BBC reported. But the promise is at least a very good start.

New emojis were first announced back in February by the Unicode Consortium, the non-profit organization that manages emoji standards (which I personally had no idea was a thing). That list included some emojis that were not previewed in Apple's announcement, like a llama and a mosquito, CNN Money reported.

But never fear, llama fans: Apple says they will be included once the update rolls out. I guess the company wants to leave us with a few surprises when all these new emojis are finally available later this year in an iOS update.