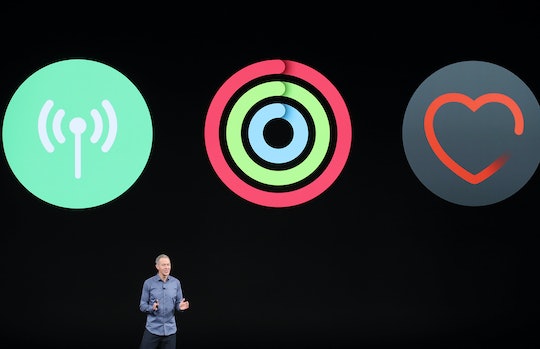 All eyes were on Apple's annual developer conference yesterday, as fans waited patiently to find out what the tech giants had up their sleeves. And for once, women's health was a huge focus. Apple Watch's new menstrual cycle tracker app is going to be a game changer.

By logging information related to your menstrual cycle, the new Cycle App will be able to predict important monthly markers like upcoming periods and fertility windows, according to CNN.

Users can track start and end dates, flow levels, and symptoms for each period, according to CNET. The more you track, the better the app will be able to predict your next period. If fertility tracking is your main goal, the app will let you log basal body temperatures and results from ovulation tests.

You'll then get notifications from your Apple Watch about upcoming periods and fertility windows.

"Knowing more about your menstrual cycle gives you a window into your health, from simply insuring you are prepared to understanding your personal patterns and regularities," Sumbul Desai, Apple's Vice President of Health said during the Worldwide Developers Conference, according to CNN.

The Cycle App will be part of Apple Watch's watch OS 6 update and will be a stand alone application. It will also be available via the health app on all iPhones when operating system iOS 13 becomes available in the fall, according to ABC News.

While cycle tracking apps, like Clue and Natural Cycles, have long been available as add-ons to the Apple Watch, this is the first time the company will be including it into the watch's standard features.

It's recommended that women track their period for three months, to find out what a "normal" cycle is like for them, because everyone is different, according to Medium.

Not only is a menstrual tracker useful for predicting fertility and future periods, but it can help those who suffer from endometriosis and polycystic ovary disease (PCOS) by offering symptom tracking services, according to The Endo Fund.

There are other benefits to tracking periods, as well. It can help track your sex drive, which ebbs and flows as the month goes on. It can also help track your moods throughout the month, as these are often related to fluctuations in hormones related to your cycle, according to the makers of the menstrual app Clue.

This isn't the first time Apple has added a cycle tracking feature to one of its products. Outcry in 2014 about the lack of women's health features lead to the inclusion of a menstrual tracker for iPhones in 2015, according to Verge. But this is the first time it will be available for Apple Watches.

Other health related additions to the Apple Watch's upcoming update include a healthy hearing app and a new and improved fitness tracker.

The new menstrual cycle tracker is part of a larger push for the Apple Watch to be a comprehensive device health tracking device. Can they become a contender among other companies who are already pushing women's health to the forefront? The answer remains to be seen, but the menstrual tracker is a good start.