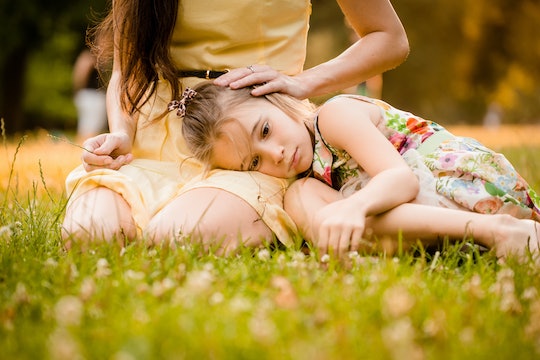 How To Regain Your Child's Trust After You Prank Them, According To A Child Psychologist

April Fools' Day might seem like the perfect opportunity to have a little harmless fun at the expense of your kid, but not every child likes the feeling of being pranked — something many parents unfortunately learn the hard way. It's probably safe to say that in the vast majority of cases, parents aren't thinking about the possibility of violating their kid's trust with something so silly, but for some kids, even silly stuff can cause serious distress. So what if you go too far? How can you regain your child's trust after you prank them?

This isn't just an issue that comes up around the first of April, either. Think of all the Jimmy Kimmel-inspired videos that go viral every year, of parents pretending to have eaten all their kids' Halloween candy or given them a lame holiday gift. As a mother of three, I have a hard time believing that most of those moms and dads are intentionally trying to be cruel, and I'm guessing that most of those kids bounce back quickly enough. But there are always some children who seem legitimately shocked, sad, and angry by their parent's betrayal. Because even though betrayal seems like a strong word when you're talking about Halloween candy or April Fools' Day, that's still how kids are going to interpret some pranks by their parents.

If your child feels that you've betrayed them, it's important to acknowledge their feelings and show real remorse, Dr. Fran Walfish, a Beverly Hills family and relationship psychotherapist, author of The Self-Aware Parent, and regular expert child psychologist on The Doctors (CBS), tells Romper.

"If you breach your child’s trust by pranking them with an April Fool’s Day trick, begin with an authentic, genuine apology," Dr. Walfish says.

In a healthy relationship, what Dr. Walfish calls a "pass" can be allowed on these occasions, and, as long as parent and child are both willing, the breach of trust can be repaired.

"When the offender demonstrates genuine remorse for hurting the other person, owns up to his part of the equation and becomes accountable, and makes the turnaround smoothly in a completely committed fashion," she says, something positive can be gained from the experience and the parent-child bond can be strengthened. In fact, by owning up to their own mistakes, parents can even help kids to understand that nobody is perfect (and that's okay).

"That is why it's so important for parents to be accountable for their errors," says Dr. Walfish.

"Teach your children to strive to be 'good enough.' Help them see that perfection does not exist. When they err, teach them to forgive themselves gently in order to remain motivated to keep trying."

In other words, yes, you can turn this into a teachable moment. But where do kids' ages come into play? Maybe because of all those aforementioned viral videos, we tend to think of little kids freaking out over parental pranks, but as Dr. Walfish explains, bigger kids might actually be more at risk for adverse reactions.

"One of the most sensitive, vulnerable ages are the tween and teen years," she says.

"Your child is struggling between standing on her own two feet and needing close proximity to you for dependence and comfort. You don't want to add gasoline and a log to an already burning fire."

Often most inflammatory of all (unsurprisingly) are pranks that involve social media in some way.

"Posting about your tween/teen online can potentially damage the relationship a parent has with their kid," Dr. Walfish says.

Never mind the fact that posting about your kid can also damage her social life and self-esteem, depending on the nature of what you share.

"Once you push 'post' it's out there forever," she warns.

So if you're planning on pranking your kid this April Fools' Day, do it in the kindest, most compassionate, age-appropriate way possible — and be prepared to apologize. Big-time.