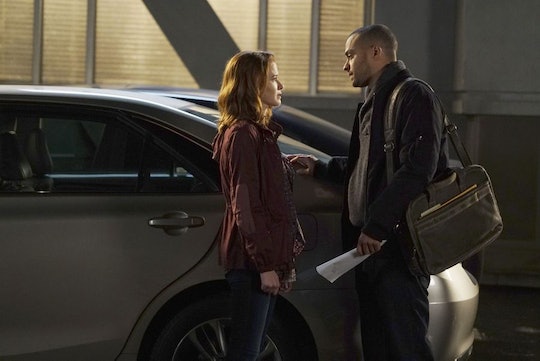 April Has A Pregnancy Scare On 'Grey's Anatomy,' & Loses Arizona As Her Doctor

In case you weren't aware, Grey's Anatomy aims to make you cry and feel emotional pain weekly. Even when you think it might be a happy episode, you're wrong. Something will definitely happen that will break your heart. That's why when April was getting another ultrasound we all should've been suspicious. It doesn't matter that her first son died in her arms. Or that she then got a divorce and almost went into custody battle over her child that isn't even born, yet. Nope. April was having another pregnancy scare on Grey's Anatomy, and there's no reason we should have been surprised.

After Arizona confirms that the baby doesn't have osteogenesis imperfecta, or OI, like Samuel, April and Jackson's son, she makes a face while they count the baby's toes. April notices Arizona's look and forces Arizona to tell her what's wrong. "It's the brain," Arizona says.

The brain? What does that even mean? What's wrong with the baby's brain? The unfortunate truth is Arizona doesn't know. It could be something as simple as a problem with the ultrasound or something more serious like an infection in the brain. Of course, April automatically thinks the worst, scared that her second baby will die too. It doesn't help that Penny was in the room to witness all of this unfold.

Arizona sends Penny to take more tests and when April still feels uncomfortable Arizona decides to put her and the baby under anesthesia so they can do a MRI to make sure the baby is okay. After putting us all through a very stressful episode the MRI confirms that April and Jackson's baby is indeed okay. However, based on how April reacted to hearing the news about the baby's brain, Arizona decides she can no longer be April's OBGYN.

After seeing Meredith's continued struggles in life it's no surprise that we were all worried. Anything can happen in Shondaland and when it comes to our favorite characters, no one is ever truly safe. Thankfully, in this case it was a false alarm and April and Jackson's baby is still OK. At least for now.

The fact that April decided to proceed with the MRI even though it meant using anesthesia is a little concerning, and one can't help but wonder if that'll come back to haunt her. Maybe it's because we've been watching Grey's Anatomy too long but it'll be hard to trust that April and Jackson's baby is OK until April gives birth.