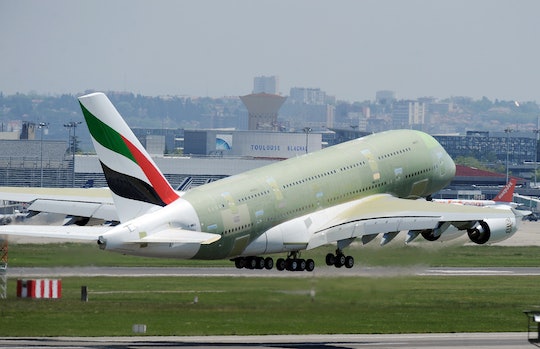 After last week’s attacks in Paris, anxiety in airports is understandably through the roof. And although security screening is usually left to professionals, this week two Southwest Airline flights were allegedly delayed because fellow travelers flagged individuals of Middle Eastern heritage boarding flights. On Wednesday, two Arab-speaking Southwest Airlines passengers were held in Chicago because other passengers thought they were terrorists.

Another passenger allegedly overheard them speaking Arabic and reported them to Southwest Airlines employees. The two men were allegedly taken aside during the boarding process at Chicago's O'Hare Airport because another passenger “was afraid to fly with them,” according to NBC Philadelphia. Maher Khalil and Anas Ayyad are reportedly American citizens and friends from Philadelphia who were visiting their respective families in Chicago. When Romper reached out to Southwest Saturday for comment on the alleged incident, a spokesperson responded,

We had a slight delay boarding, lasting only a few minutes, while we completed a brief passenger conversation. All Customers were boarded and traveled to their scheduled destination, Philadelphia. Southwest Employees welcome hundreds of millions of Customers onboard annually. We are responsible for the comfort of all passengers and do not tolerate discrimination of any kind.

Khalil claimed that after being taken aside, he called police to report being racially profiled. Eventually, Khalil and Ayyad were evidently able to board the flight — though allegedly not without a cost. Passengers were still curious about one of them carrying a small white box — so they allegedly had to surrender their snacks. Khalil told NBC Philadelphia:

We're walking down the aisle and I'd already told him [Ayyad] to smile and act like nothing was wrong. But then people kept asking me, 'What's in that box?!' I was carrying a small white box. And the passengers made me open the box! So I shared my baklava with them.

Here's the thing: if a passenger gets to the boarding gate, they’ve gone through security. It would be odd for Southwest Airlines to “outsource” the flagging of a passenger because someone felt uncomfortable about the language they were speaking.

According to the NBC Philadelphia report, Khalil said:

If that person doesn't feel safe, let them take the bus. We're American citizens just like everybody else.

No matter what your politics, it would be embarrassing if civilians at O’Hare were somehow able to make calls about national security — especially when they aren't privy to the screening and security process like airport personnel are. If events transpired as they claim, Khalil and his friend Ayyad acted like good citizens by notifying the authorities of possible racial profiling and then sharing their travel eats with their accusers. Standing up to injustice and for snacking is one of America's founding principles, right?

More Like This
What Exactly Are Minions, Anyway ?
Family Of Grandfather Killed In Highland Park Mass Shooting Say He "Saved" Their Lives
Is It Safe To Keep Using Period & Fertility Apps In A Post-Roe America?
Megan Fox Explains Why She Asked Machine Gun Kelly If He Was Breastfed As A Baby