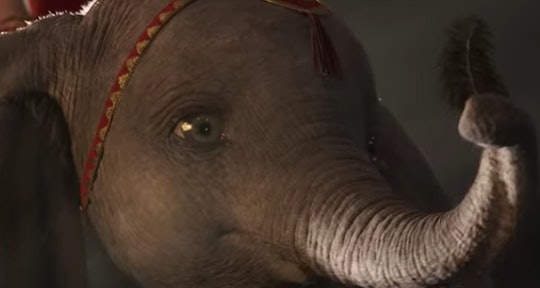 In the tradition of Cinderella and Beauty and the Beast, Disney is reimagining another old animated classic into a gorgeous new live-action update. And as the release date creeps closer, fans are learning more about what might await them when they head to the theater. For instance, we now know that Arcade Fire's lullaby in the new Dumbo movie is a new twist on a classic song.

As INSIDER reported, the new film, which is coming out at the end of March, features a bevy of stars, including Colin Farrell, Michael Keaton, Danny DeVito, and Eva Green.

The directing's not too shabby too either, with Tim Burton at the helm, as INSIDER noted. But one of the cool additional touches is a remake of the classic song "Baby Mine," which first appeared in the 1941 original version of the movie, according to Rolling Stone.

With a new version of the vintage story of an underdog elephant with magical powers, the giant movie studio is banking on audiences seeming to love an old favorite with modern updates, as Quartz detailed. After all, if people already know and love the story, as Quartz noted, it's cheaper and easier for Disney to concentrate on remakes.

And while I hope that doesn't mean we still won't see some original movies from time to time, in this case, the Dumbo trailer looks amazing, with a stellar cast and beautiful cinematography (the same formula that I feel like made the other remakes so charming. My whole family loved the Beauty and Jungle Book remakes, even though we already knew the tales well).

Noted musician Danny Elfman serves as the composer on the film, according to Rolling Stone, so it's no wonder the movie features an updated rock version of the "Baby Mine" song, which was first sung by Betty Noyes over a half-century ago for the original Dumbo, according to music site Under the Radar.

Noyes recorded the song for a sweet moment in the original animated version in which Dumbo is cradled by his mommy elephant, according to website Song Facts.

"Baby Mine" was nominated for an Oscar for Best Original Song in 1942 but didn't win, although musicians Frank Churchill and Oliver Wallace did get statuettes that year for Dumbo's score, the website added.

Now, the new version is all about family for Arcade Fire, who, as quoted by Under the Radar, noted that some relatives participated in the recording of the new version.

"My mom plays the harp on the track, my brother the theremin, my wife [Régine Chassagne] sings and plays drums, and our son even plays the triangle," the band's Win Butler explained.

"I will forever relate to the song thinking about the people I hold so dear that are so precious to me. Listen for the cameo of my grandpa Alvino's famous Sonovox at the end."

This is so sweet, and so is the tune. I love the Bette Midler version of it as well, from the 1988 tearjerker Beaches. Guess I have no other choice but to take the fam to this one when it opens in theaters on March 29!