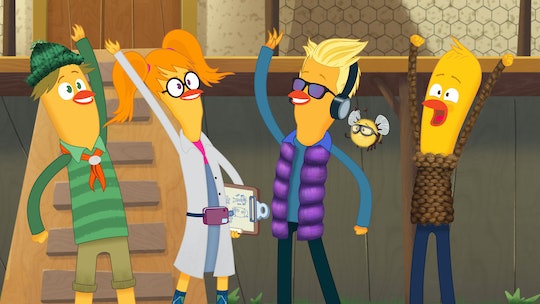 I don't know about you but when I think of Tony Hale, the first thing that comes to mind is Arrested Development, or maybe his character Gary on Veep. For your kids, however, that silly voice will soon likely remind them of their new favorite cartoon on Netflix, Archibald's Next Big Thing. A clip of the show, exclusively obtained by Romper, proves Archibald's Next Big Thing is bound to be as goofy and hilarious as anyone could hope for from Hale. In the clip, Archibald and his brother Finly help their sister Loy rediscover the magic of karaoke by encouraging her to sing about what she loves — the periodic table. It's weird and it's adorable and I love it.

The kid's show is based on the children's book of the same name, about an extraordinary chicken named Archibald and his three siblings, each of whom have their own "thing" — except Archibald that is. The book was actually written by Hale himself, and he also created and executive produces the show, in addition to voicing the main character. Clearly, it's a world and a story that means a lot to the actor.

On the book's official website, Hale is quoted as saying, "The thoughts of an actor aren't very different from Archibald's. I always find myself looking ahead to the next big role, the next big opportunity, obsessed with the question 'What's next, what's next, WHAT'S NEXT!?' But embracing and enjoying the PRESENT is a message I want both my daughter and myself to remember. Every. Single. Day."

In the exclusive clip above, Archibald and Finly discuss their favorite parts about karaoke, which Loy seems unsure about. Finly says it's dressing up (?) and Archibald likes dancing — of course. Loy, ever the achiever, says she used to love earning points with karaoke, but when asked what she loves about karaoke itself can't come up with an answer. To make her feel better, Archibald starts drumming a fun beat on a conveniently located nearby trashcan, and tells her "the best part of karaoke is losing yourself to the music!" At a loss as to what to sing about, Finly tells her to "just sing what you know!" which leads to the best musical breakdown of the periodic table of elements I've heard since I was in elementary school myself. It's all very cute, and colorful, and fun and I have a feeling the show is about to become a fast favorite with kids.

As for adults, they may be happy to learn that Hale is far from the only A-list voice acting in the show. Adam Pally (The Mindy Project) plays Sage, Chelsea Kane (Baby Daddy) plays Loy, Jordan Fisher (To All The Boys I Loved Before 2) plays Finly, and Rosamund Pike voices the narrator. And this, of course, does not even include the slew of guest stars which include greats like Hale's Veep costars Julia Louis-Dreyfus and Gary Cole, as well as Christine Baranski and RuPaul (yes that RuPaul).