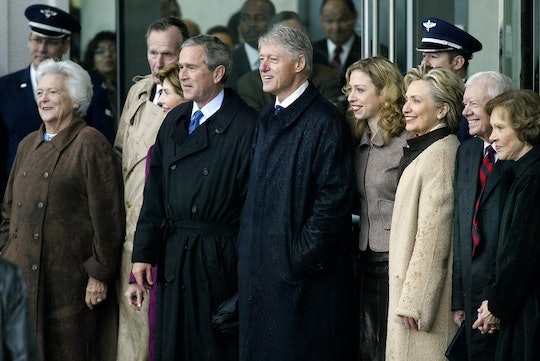 Are All The Bushes Voting For Hillary Clinton? They're Not Endorsing Trump

It seems that former president George H.W. Bush isn't a sore loser. Even though her husband snatched the presidency from him back in 1992, Bush, a Republican, is reportedly planning on voting for former Secretary of State Hillary Clinton this November. In fact, nearly all of the Bushes might vote for Clinton, because not a single one of them seems to be voting for Republican nominee Donald Trump. The fact that the former president isn't a Trump supporter isn't new; he famously declined to attend the Republican National Convention in July. But this is the first time his pick for president has been revealed.

Former Maryland Lt. Gov. Kathleen Hartington Kennedy Townsend (yes, one of those Kennedys) first broke the news on her Facebook page on Monday, posting a photo of herself posing with Bush and captioning it, "The President told me he’s voting for Hillary!!" Politico then spoke to Townsend by phone, and she confirmed that she'd met the 41st president in Maine, and he had indeed told her he was voting for Clinton. Bush Spokesman Jim McGrath declined to confirm or deny the story, stressing that Bush is a "private citizen." Bush's former vice president and noted Murphy Brown opponent Dan Quayle is Team Trump, but he appears to be the only Bush-adjacent person who is.