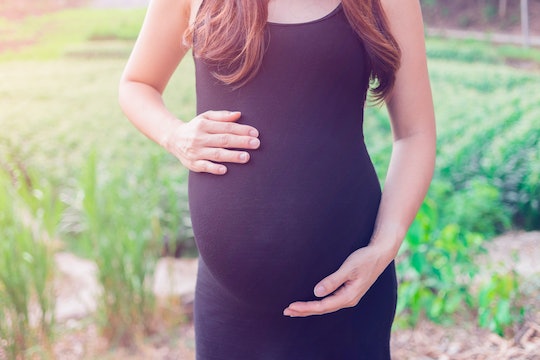 Are All Twins Delivered By C-Section? Science Weighs In

With all of celebrity twin babies born recently (I'm looking at you, Amal and Bey), a lot of scrutiny has come around about how these babies came into the world, whether it was a vaginal birth or a C-section. Obviously, it's nobody's business, but twins are still a mystery to most people, despite how common they really are. If a twin mom is planning for delivery, she may be wondering — are all twins delivered by C-section, or can you have twins vaginally?

According to an article in Reuters, about 75 percent of twins in the United States are born via C-section. That rate sharply increased between 1995 and 2008, seeing a peak in 2011, until the details of a study that concluded a C-section may not always be the safest or best route for delivery were released.

So why are so many twins born via C-section in the U.S.? There's not one answer to that question. C-sections are often planned, making them easier to schedule. If you are a mom, and you want to make sure a specific doctor delivers you, a planned cesarean delivery affords you that privilege. Also, it's considered a preventative measure of safety by many physicians, and it's thought to limit risk to mother and child by avoiding a prolonged and possibly complicated labor, noted Live Science.

Are all twins delivered by C-section? No, and the rate at which C-sections are performed for twins may be changing.

Not only have American obstetricians committed to lowering the rates of C-sections overall, according to the American College of Obstetricians and Gynecologists, recent studies have shown there just isn't data to support routine C-sections for twin births.

A study completed by the Sunnybrook Research Institute in Toronto in 2012 evaluated the pregnancy and births of 2500 sets of twins, finding that there was no real benefit to having a C-section for the mother or the children. Researchers evaluated issues of birth position (breech versus head down), duration of pregnancy, childbirth, and postnatal outcome of mother and children, and determined that the risks of surgery outweigh the risk of vaginal delivery. It suggested that OB-GYNs look at ways to decrease the number of C-sections for twins.

In the end, though, it's all about choice. When you have the information before you, you are a better advocate for your own health and birth. Talk to your provider, tell them your concerns and desires, and hear them out. The goal isn't to force a mother into one method of delivery over another, rather to give her options and educate her so that she may make an informed decision.

More Like This
Mom Gives Birth To Record-Breaking 16-Pound Baby
What Foods Fight Nausea During Pregnancy?
OB-GYNs Explain The Connection Between Stress & Miscarriage
Diastasis Recti Exercises You Can Do At Home To Heal Your Abdomen
What Parents Are Talking About — Delivered Straight To Your Inbox