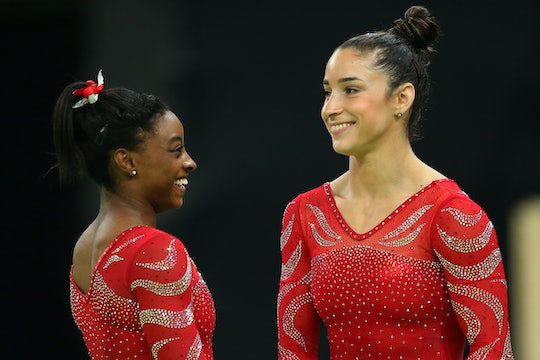 So sports are nice and all, but here's the thing about the Olympics: since they're held so infrequently, the journey and the athletes' stories matter so much more than that of, say, a pitcher or a soccer goalie. You can really get invested in the competitors personal histories, and get to know their families. Which is how the world came to learn that Team USA gymnasts Aly Raisman and Simone Biles' parents are basically Chicken Soup for the Soul, personified. But are they all friends?

Unfortunately, as tight as their daughters are, there's no evidence that the Raismans and Biles are besties, which makes sense, given that Lynn and Rick Raisman live in Massachusetts and Ron and Nellie Biles live in Texas. Lynn and Nellie don't even follow each other on Twitter, which is a bummer, but then again, it looks like Nellie isn't much of a Twitter user at all, tweeting just 47 times in the last 4 years. But there's no reason we can't all imagine the Raisman and Biles families getting down in Rio on Tuesday night, after their girls won the gold medal for Team USA in women's team all-around gymnastics. They can't take that away from us.

For those who aren't familiar with the families, a primer: Ron and Nellie Biles weren't always Simone's parents. For the first six years of her life, Ron was her grandfather, and Nellie, her step-grandmother. But Simone and her younger sister, Adria, were in and out of foster homes due to their biological mother's addiction issues, according to Texas Monthly, and when her custody of the girls was terminated when Simone was 6, Ron and Nellie stepped up and adopted the pair. "It’s up to you guys," Nellie told her daughters. "If you want to, you can call us Mom and Dad." They have ever since. Soon after her adoption, Simone discovered gymnastics, and Ron, who once worked for the FAA, and Nellie, who once ran a chain of nursing homes, have now transitioned into gym owners; they opened the 5,200 square foot World Champions Centre last November, according to the New Yorker.

As for the Raismans, Lynn recently told the New York Post how the entire family's life revolves around Aly's gym schedule. "There were a number of times where my husband took her siblings away, and I stayed home with Aly. There were birthdays, holidays and family gatherings she missed." After the P&G Championships, Aly told reporters that sometimes after practice, she has to call her father for a ride home because she's too exhausted. Does all the stress impact them? Hell yes! Lynn and Rick's audience reactions to their daughter's performance are infamous, as they have no problem displaying the way every anxious parent is feeling (though many of us try a little harder to hide it).

Though they have their differences, they all ended up in the same place, and you can't argue with the results. The Biles and Raismans have raised two of the world's five best women gymnasts, and somewhere in Rio right now, I hope they're celebrating together.