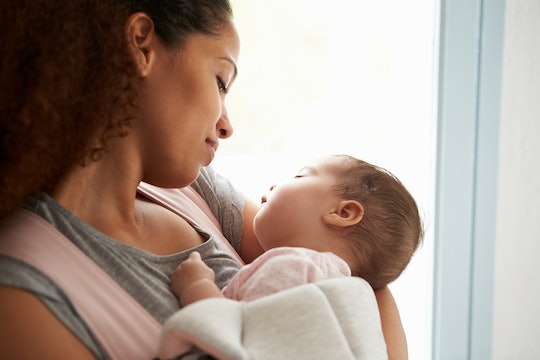 There Are A Lot Reasons Why Americans Are Having Fewer Kids, New Research Finds

It's been speculated for a while that due to a number of issues like financial constraints or increased opportunities for women, millennials aren't interested in having big families, as prior generations might have been. However, new research shows that this trend is applicable across the board. So are Americans having fewer kids as a whole? New research points to yes.

The Pew Research Center's American Trends Panel conducted surveyed research this summer to determine where Americans stand on their desire to have kids. The results showed a distinct trend: almost 70 percent of parents in the United States said it was unlikely that they would have more kids, and about 40 percent of young adults said they didn't want to have kids at all.

The study cited a number of reported factors leading to the decreased interest in growing families, chief among them was medical issues (41 percent), then age (25 percent) followed by already having kids, financial reasons, no willing partner, or other.

In addition, there was a difference in responses based on age range, as almost 90 percent of individuals in their 50s said they would not be having more kids. However, as far as gender goes, men and women's answers remained consistent with their age groups, rather than diverging based on sex.

This is, for the most part, not entirely a surprise.

This summer, The New York Times reported that Americans are indeed having fewer kids, and went on to explain why. Unlike the research, The New York Times' piece claimed that those they surveyed cited financial resources as their top reason more children (or any children) were out of the question, particularly referencing the costs related to childcare.

Jessica Boer, a 26-year-old childless woman who was interviewed for that story explained that her perspective on wanting fewer kids is a matter of women being aware that they now have more options for their lives. “My parents got married right out of high school and had me and they were miserable... But now we know we have a choice," she told The New York Times. "I would have the responsibility to raise this person into a functional and productive citizen, and some days I’m not even responsible."

However, this trend seems to be largely consistent with the fact that millennials, in particular, do things later than prior generations as a whole, if ever.

Times are changing, and trends are changing. Americans, and millennials in particular, no longer feel an obligation to have as many children as possible, nor do they view it as their primary objective in life.

Whether it's financial constraints, a desire to pursue other opportunities in life, or the simple recognition that one does not have to conform to preexisting expectations about reproduction and family building, there's an evident shift in the way Americans perceive having children, and we'll have to watch in the coming years to see how that potentially impacts — for better or for worse — our society and culture economically, socially, and psychologically.

More Like This
The 35 Top Toys For 3-Year-Olds
If Your Kids Love Their Elf, You Don't *Have* To Put Him Away On Christmas
20 Ways To End Your Elf On The Shelf For Good
Your Guide To Tipping Day Care Workers For The Holidays