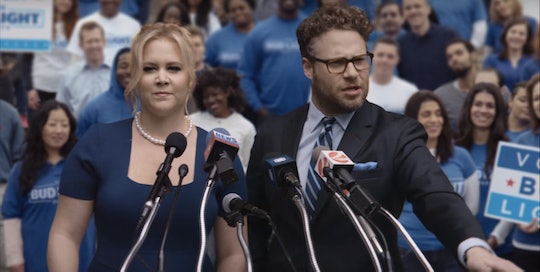 Amy Schumer and Seth Rogen are known to rolls with some pretty solid celebrity friends (Jennifer Lawrence, James, Franco, and Joseph Gordon-Levitt, just to name a few) and even share a few mutual buddies, like the incomparable Mindy Kaling. But are Amy Schumer and Seth Rogen friends themselves? That's the question that's been on everyone's mind since Bud Light aired its Super Bowl 50 commercial.

OK, maybe not everyone's mind. But any one with an interest in Hollywood's comedic elite has been wondering about the comedians' potential friendship. Is there real chemistry between the Trainwreck star and former Freaks and Geeks actor? Or did they fake their friendship for a few grand and lifetime supply of Bud Light? (Granted there are worse reasons to fake a friendship and worse people to fake it with, but that's besides the point.)

In Bud Light's Super Bowl commercial, Schumer and Rogen spoof the most recent presidential nominees and political chaos by announcing their candidacy for the Bud Light Party. And, if you watch the ad in it's entirety, you'll see just how kick *ss the party is. I mean they have Paul Rudd on their team. How can you say no to a party that's supported by most charismatic, beautiful human being on the planet?

Needless to say, it's a pretty convincing campaign ad, and I could see the majority for America voting these two into office come November. But just because they are running along side each other doesn't mean Schumer and Rogen are BFFs. I mean, lots of Presidents and Vice Presidents see themselves as colleagues rather than friends. And, unfortunately, I think the same can be said for these two.

Both Schumer and Rogen are active on social media, but neither has used their platform's to promote the Super Bowl commercials (which, as an aside, already has more than 2 million views on You Tube.) Also, Schumer hasn't shared any behind the scenes shots of the ad on her Instagram, which is rare seeing as she documents every moment of her life.

But all isn't lost America. There is no reason why these comedic geniuses shouldn't be friends, or at least post a selfie together. I mean, look at the chemistry, the mutual friends, and the shared love of weed. I still have hope in a Schumer-Rogen friendship, and can't wait to see if this comes to fruition on Super Bowl Sunday.