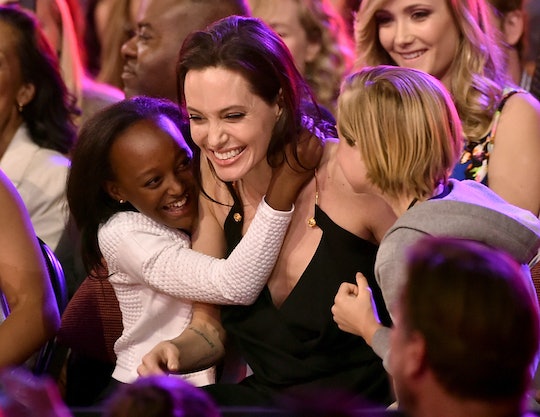 Now that the Jolie-Pitt family is breaking up, all eyes are on the two superstars' children. Angelina Jolie filed for divorce from Brad Pitt earlier this month for the "health of their family," according to spokespersons. Since she first brought home her eldest son, Jolie has faced a ton of scrutiny for how she raises her children in the first place, and now that a divorce is underway, inquiring minds want to dig even further into her life and know tiny details about what the custody arrangements will look like, or how much Angelina Jolie's kids — who are homeschooled — will be affected by the decision.

Thankfully, on the education front, it doesn't look like things will be interrupted too badly. Because their parents have a crazy busy schedule, the six Jolie-Pitt children initially attended a French school, Lycée Français, which has international campuses, so wherever they were, they could pop back into their routine.

But that got to be too much apparently and now the children are homeschooled by a "team of international teachers," according to StarPulse. Jolie is a strong proponent of homeschooling and of letting her children explore the world with her, but some outsiders (like people who have little else to do except talk smack about the family on the internet), think that her parenting style is a little too loose. Of course, if you were lucky enough to have the world at your fingertips — all of which you could give to your kids — it's possible you might think differently. According to The Daily Mail, Jolie said in 2011, "‘... We travel, [but] I'm the first person to say, 'Get the school work done as quickly as possible because let's go out and explore.'"

She added, "Instead of tomfoolery in the class room, I'd rather them go to a museum and learn to play guitar and read and pick a book they love." Their globetrotting lifestyle and Pitt and Jolie's distaste for the American education system were reportedly what led them to the decision.

"I do think we live in a different age and the education system hasn't caught up with our children and our way of life," Jolie added. It's unconventional, yes, even in terms of modern homeschooling curriculums, but the Jolie-Pitts lead an unconventional life. So she sort of has a point. Maybe traditional schooling, especially when the kids are younger, isn't the best thing for her family.

Maddox, Pax, Zahara, Shiloh and the two twins, Knox and Vivienne are probably just fine, especially given that their two parents really have made them the center of their world. (Because, obviously, that's what parents do.) Over the years, the couple spoke often about their parenting styles. But it was those different styles that allegedly led Jolie to file for divorce earlier this month.

A source told E! News that Pitt is pretty heartbroken that his kids have taken center stage in the coverage of his breakup with Jolie. "Brad was committed to giving them stability. When she would travel, which was a lot, he would stay with them. Any time he wasn't working, he was with the kids," the source told E! News.

Who knows, maybe he'll even step in as tutor now and again throughout the kids' school day going forward. And if nothing else, at least the family can rest assured that the children are getting a well-rounded, creative educational experience.