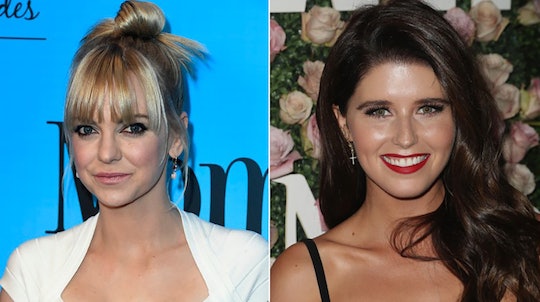 Anna Faris & Katherine Schwarzenegger Have Nothing But Respect For One Another

Co-parenting after a divorce can be hard, but some celebrities make it look so easy. When Anna Faris and Chris Pratt split in 2017, for instance, they made their 6-year-old son, Jack, their main priority. And when Pratt and now wife Katherine Schwarzenegger began dating, this trend continued. And for those wondering whether Anna Faris and Katherine Schwarzenegger are friends in real life, the answer isn't so cut and dry. But what is clear? Their relationship is built on a huge level of respect.

Faris and Schwarzenegger should be role models for how well they communicate, as they have only said the sweetest things about each other in public. In January, for example, Faris took to her podcast, Unqualified, where she revealed that Pratt texted her after he proposed to Schwarzenegger. Faris had the sweetest things to say about their engagement when the news went public, stating, according to People: "Sweet Chris, my ex, got engaged to Katherine today and I'm so happy for them. I knew that it was going to happen, and I love her and I love him. I'm just so happy that they found each other."

The respect is mutual. After Schwarzenegger launched her own podcast in May, she opened up about her admiration for Faris, especially for her skills as a podcast host. "[Anna] has an incredibly successful podcast," she told Us Weekly. "I really admire all the work she has done, and she's definitely an expert at it. Learning from her is another huge gift. I have such great people in my life that I'm able to learn from in all different areas of life and, and she's definitely someone I look up to in the podcast world."

Awwww. How sweet are they?

In March, during an appearance on the podcast, Divorce Sucks!, Faris told the show's host, Laura Wasser, that she has no reason to not like Schwarzenegger or Pratt because they're bonded over making sure their son is happy. "Grudge-holding is not something that Chris and I do," she said, according to People. "So we wanted to make sure, of course, that Jack was happy, but that we were happy and supportive of each other and that we could have this fantasy idea of, do we all spend Christmas together? Do we vacation together?"

Simply put, they have no reason to not be friendly, especially since Jack is a huge part of their lives. The fact that they can put their mutual love for their son to the forefront and still like each other is so awesome.

"I'm really grateful that we're so close and that we're, that we have this, this I think that we both, I know that we won't the best, just happiness," Faris said on Divorce Sucks!, according to TODAY.

Of course, Faris has also acknowledged how hard breakups can be. During a January episode of Unqualified, she admitted that while breakups suck, happiness has to be the main priority. "Chris and I work really hard because we have Jack," she said, according to Entertainment Tonight. "That is sort of the long game idea and making sure Jack is really happy, which makes us really happy."

Based on this philosophy, it makes sense that Faris reportedly attended Pratt and Schwarzenegger's wedding this past June, according to Hollywood Life. Although Faris and Schwarzenegger might not be besties, getting coffee all the time, or watching Bachelor in Paradise together every week, they do have a mutual respect for one another. It's a relationship built on understanding, that's for sure.