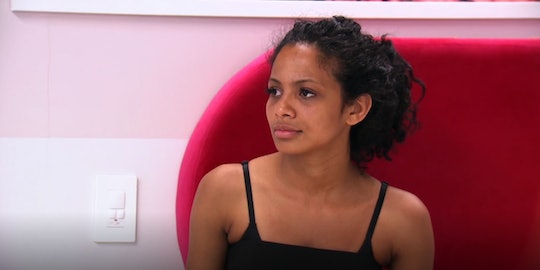 Ex on the Beach is well into its third season, and one of the most talked about love quadrangles is that of Cameron, Ariana, Alexis, and Mechie. After Alexis was voted off the show last week, Cameron was left with his ex-girlfriend Ariana in the house. Mechie is interested in pursuing a relationship with her, and fans are hoping she finally cuts Cameron out of her life. They may have had a connection on the show, but viewers are now wondering if Ariana and Mechie are still together after Ex on the Beach.

It’s hard to say right now, because Ariana and Mechie haven’t posted any current relationship details on their social media pages. Ariana’s Instagram is set to private, and Mechie’s IG page doesn’t contain any clues about his love life. It looks like fans will have to keep watching through the rest of the season to see if the two make it out of the Malibu house as a couple.

In the Sept. 5 episode, Cameron’s true colors shine when his other roommate, Jocelyn, comes by the house to spill the tea. She reveals that Cameron took regular showers with Ariana while he was dating Alexis, and that he even promised to marry her. She also notes that Ariana is the one that pays Cameron’s rent, insinuating that might be one of the reasons he strings her along.

When the trio heads to the show’s relationship court, Cameron sides with Alexis over Ariana, leaving everyone in shock. Cameron and Ariana have known each other for 10 years, are roommates, and have been dating on and off. He hasn’t known Alexis that long, and admitted that he secretly hooked up with Ariana while he was dating her.

At the end of the episode, Alexis is voted off the show, and the housemates call Cameron out for his emotional immaturity. In a preview for the Sept. 12 episode, Mechie tells Cameron that he wants to ask Ariana out, and Cameron says it’s okay, but it would mean he’d have nothing to do with Ariana anymore.

“When I talked to Mechie, Mechie told me that he had a conversation with Cameron, told him he was going to pursue this,” Ariana tells Kenya in the clip. “Like Mechie told me that Cam told him ‘Cool,’ but like basically he wasn’t going to f— with me anymore.” Kenya is livid to hear this, and she tells Ariana that Cameron is manipulating her so she can never move on from him.

I know fans are rooting for Ariana to move on and find someone that can reciprocate her love and loyalty, and it will be interesting to see if Mechie can be that guy. But as their relationship develops on the show, it’s going to be more intriguing to see how Cameron reacts to the situation, and whether or not he tries to play his way back into Ariana’s good graces.