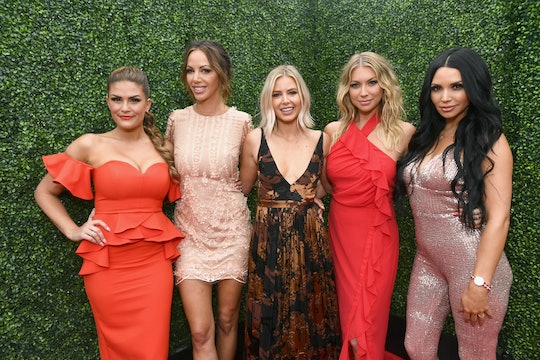 Ariana & Stassi Put The Past Behind Them On 'Vanderpump Rules'

Many of the stars of Vanderpump Rules have been friends for years, even if those friendships have faced some major highs and lows. Some cast members, however, have never really been more than co-workers. Stassi Schroeder and Ariana Madix weren't especially close in years past (understatement), but this year they decided to have a joint birthday part. So does that mean Ariana and Stassi are friends after Vanderpump Rules?

Ariana and Stassi have always had a complicated history, but there have been conflicting statements about what first sparked their animosity. Stassi previously told In Touch Weekly that the problem didn't stem from her; she had no issue with Ariana, but Ariana didn't like her. "I don't understand it, nobody's ever understood it, but I still try," she said.

But according to Ariana, Stassi started it. She went after Ariana first, which triggered Ariana's less than pleasant response. She felt Stassi was manipulative, saying, "Stassi has cultivated the art of playing the victim in order to gain power over other people. She created this conflict."

But despite all the arguing and name-calling over the years, somehow Stassi and Ariana have managed to totally turn things around. That joint birthday party was just the beginning of a brand new friendship.

Ariana and Stassi had a weekend-long celebration in late June of this year to celebrate their birthdays; it was Ariana's 33rd and Stassi's 30th. It was an opulent party, with the birthday girls dressed up like jewel-encrusted ice queens — think Game of Thrones' White Walkers, but make it fashion. All of their friends were in attendance and social media made it seem like they had a great time, with no drama or arguments in sight. Ariana and Stassi even had portrait cookies with their faces on them. Is that not the truest sign of friendship?

Since then, conditions have continued to improve. Ariana posted an #OOTD (Outfit Of The Day, FYI) picture on her Instagram stories in August. She tagged Stassi with the caption "just for you" and Stassi reposted it with a ton of heart emojis. While on Watch What Happens Live with Andy Cohen, Stassi made it clear that she'd always wanted to be close with Ariana. "Listen, I have loved Ariana since the beginning, and it's only been a matter of time where I'm like, 'Can't you just love me back?'" Stassi said. "And she does now."

Ariana confirmed that Stassi's persistence was what changed things between them. In a confessional on Vanderpump Rules, Ariana explained, "She was really wanting to be my friend and so nice to me for so long that at a certain point I kind of just gave up the energy to be b***hy anymore."

Reality TV is famous for quick turnarounds on relationships; there have been several Real Housewives who shifted from sworn enemies to besties (and back) over the course of one between-seasons break. But it seems like Stassi and Ariana are off to a good start, so there's a chance they won't be reverting back to adversaries any time soon. Hopefully.