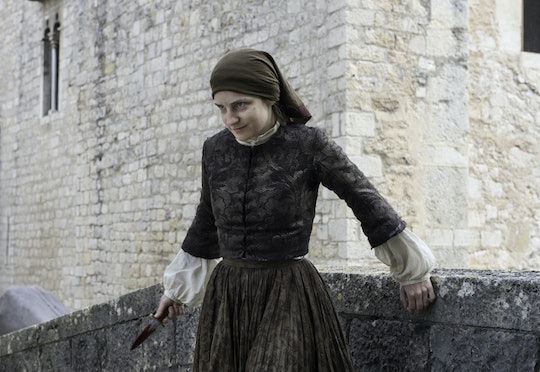 Are Arya & The Waif The Same Person On 'Game Of Thrones'? It Would Explain A Lot

On Game of Thrones, the Waif has had it out for Arya from day one and it hasn't always been clear why that is. Technically, the Waif has a lot of power over Arya: she's the better fighter, she's advanced further in her training, and she's pretty much got seniority in every sense at the House of Black and White. Despite all that, she's been ready to take Arya on since the beginning. Does she just have zero patience for Arya's mistakes? Is she jealous that Jaqen H’ghar and Arya have some kind of weird bond? Or, as a new and intriguing theory posits, could it be a lot more personal than that? Is it possible that Arya and the Waif are the same person?

This theory may be high on the WTF factor, but the closer you look at it, the more it begins to make sense. The magical mysteries of the Faceless Men often verge on the confusing and the surreal, so it actually wouldn't be that shocking to discover that Arya has been tormenting herself this entire time. The Waif could very well be a manifestation of Arya's desire to destroy herself and become "no one." That could be why the Waif's grudge is so deeply personal, emotional, and angry – it's really just Arya taking her pain out on herself.

The whole thing is very Fight Club in a big way, which makes sense because the theory originated on Reddit. User catNamedStupidity put forth the idea, citing some fairly convincing evidence. "A case can be made that when Arya came to the House of Black and White, the water that she drank induced [a dual personality] in her," they wrote. "In a way, The Waif is no one. Her only mission is to kill off Arya, the inner Arya, the one who can never be one of them."

The Waif is only even seen by Arya and Jaqen; even when Arya is fighting her on the streets of Braavos, the Waif quickly disappears and leaves Ayra looking as though she is alone. The Waif also knows everything about Arya to a creepy degree. She knows when Arya is lying. She knows where Arya is, always, without fail. That kind of intense insider knowledge could be attributed to magic, but it's also possible she knows so much because she is Arya.

The fact that they serve the Many-Faced God means that no one is necessarily who they seem to be. After failing in her first task in service of the Faceless Men, right before she is blinded, Arya removes face after face from a body, eventually revealing her own. The Faceless Men can be anyone at any time. Identity is something that's totally in flux and can't be trusted.

The most recent episode, "The Broken Man," showed the Waif stabbing Arya, whose survival is now in question. It's possible, based on this theory, that Arya stabs herself to kill the Waif in an attempt reminiscent of Ed Norton shooting himself in the head to kill off Tyler Durden at the end of Fight Club. Then again, Arya-as-the-Waif could be stabbing herself to finally destroy her true identity and become no one.

I can see this happening in the show: Arya and the Waif do battle, and after fighting valiantly, Arya is killed. We are all f**king stunned for a few moments [...].

The Waif goes to Jaqen and announces that Arya Stark is dead. The waif removes her face to reveal that it was Arya all along, and Jaqen asks who a girl is.

It would be an unexpected end to Arya's Season 6 arc, especially as she just started to regain a sense of her former identity and a clearer purpose in returning to Westeros. The fact that the next episode is called "No One" seems to imply that the House of Black and White will play into the episode in a major way, and finding out Arya has been the Waif all along would be a genuine shocker.