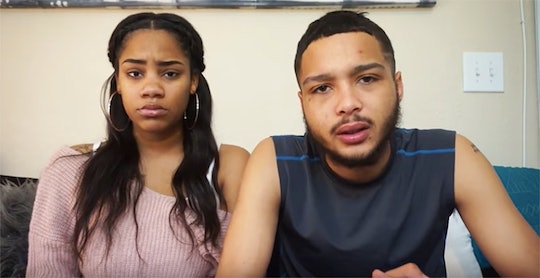 One of the most tumultuous couples on Teen Mom Young & Pregnant is Ashley Jones and Bariki "Bar" Smith, who share a baby daughter named Holly. Although the couple announced their engagement in April, some fans are curious if Ashley and Bar are still together after the show.

Ashley and Bar welcomed their daughter, Holly, in September 2017. And almost a year later, the young couple got engaged during an April installment of TMY&P, with Bar popping the question at Ashley's favorite date spot. Making matters even more adorable? Baby Holly got to witness the sweet moment.

Unfortunately, the pair's bliss didn't last for long. Bar's mom, Shenandoah “Shen” Williams, took to Twitter in June to announce their split, while calling out Ashley's mom in the process. In case you didn't already know, Shen often refers to Ashley's mother as "tea bag" because her alias is "Pastor Tea." You can't make this stuff up, folks.

"So trouble on [sic] paradise," Shen wrote, according to In Touch Weekly. "They deleted pics of each other and blocked each other, Tea bag on a give heavenly advice ?[sic]. Tea bag is a mess. I won't pretend to be hurt. But he will go back."

Bar did not immediately respond to Romper’s request for comment.

Then in August, Bar was arrested for “Battery on a Spouse/Ex Spouse/Date/Etc," The Ashley's Reality Round-Up reported. Ashley spoke out about the incident after Shen accused her of putting Bar in jail.

“I didn’t put anyone in jail,” Ashley wrote on Instagram, according to Starcasm. “Maybe if you taught your kids to keep their hands to themselves more of them would have college degrees instead of criminal records. I found my courage today. And I thank the officers that came out and helped me."

So, where does the on-and-off couple stand today? It looks like the wedding is back on.

"We are together at the very moment. We want to take it slow," Ashley told OK! Magazine in October.

Some fans weren't thrilled about the reconciliation, leading Ashley to address the hate on Twitter in November. She even admitted to having suicidal thoughts, writing, according to Newsweek: "I wonder if people wish to humiliate me and talk down on me so bad that I just say f—k it and end my whole life."

Despite all of the prior drama, Bar and Ashley appear to be on good terms today. Want some proof? Ashley took to Instagram Sunday to share a photo of the couple enjoying the sights of New York City, a post that has garnered over 23,000 likes as of Monday.

No matter what happens with Bar and Ashley going forward, one can only hope that they keep things peaceful for the sake of their daughter. Holly is the most important factor in this scenario, after all.